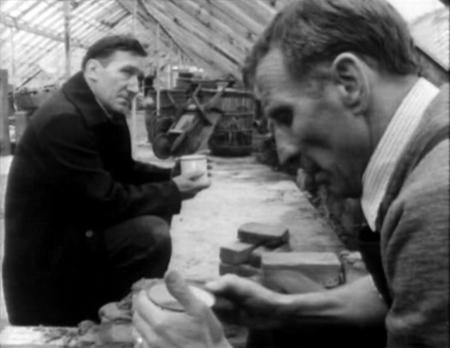 The governor speaks to Frank and asks him about future plans. Frank says as little as he did to Jakeman. The governor is worried about his lack of friends, family and contacts. "Is there anyone out there who cares a damn when you come out tomorrow?" he asks. "Yes," replies Frank, "me." The story is similar when he meets with his probation officer Mr. Hull.

On release Frank starts to see what Jakeman meant. At Ford station the locals eye him with contempt. On arriving in Brighton he struggles to adjust to the traffic and bustling atmosphere. He meets a friendlier reception when he checks in at his lodgings with Mrs. Mortimer. However it's otherwise a tough ride.

No other story gives a better insight into Marker's character. He is the epitome of the loner, uninterested in socialising. Prison has made him bitter and he is particularly grudging in his contacts with officialdom. This is despite the good intentions of both the governor and Jim Hull. He is suspicious of them, resents their attempts at control and feels he can manage well enough by himself. However, as Jim Hull makes clear in his good-natured way, he has no choice about receiving the probation "help".

The general tone of events is sour and dispiriting. Within hours of his freedom Frank has a rare liaison with a woman who approaches him on the seafront. There's no pleasure to be had here as she later tries to steal his wallet and he has to struggle with her to recover it. When he goes to a cafe for a meal the waitress (Gilly McIver, in a neat cameo) is utterly uninterested and unhelpful.

Jakeman had asked Frank to contact his wife. He skilfully traces her in Brighton but finds her cynical and miserable. Married life with a habitual criminal has truly worn her down. She derides the excuses offered by men like her husband for their villainy. She is really struggling to make ends meet.

This is most of all about Marker and Alfred Burke is in marvellous form. It's obvious even this early that the characters of Helen Mortimer and Jim Hull are going to be excellent additions in their different ways, and they are played beautifully. Among the other roles Freda Jakeman is memorable, but even more so is the manipulative, bitter but rather damaged woman Grace. Anne Ridler and Heather Canning are very impressive respectively. George Sewell is typically decisive as Jakeman.

Roger Marshall's script is expertly crafted while Kim Mills's direction is a little more unconventional than the usual understated style. At the close of this fine installment Frank has a job to look forward to - but does he have a future? Will he be allowed a "straight" life?

PS
Frank's abortive encounter with Grace is certainly the only such example on screen in the surviving episodes and there is no suggestion of any others in the lost ones. Of course Marker may have had physical relationships or contacts with women away from the episodes. Perhaps the fact that he was tempted immediately on release from prison suggests that normally he had some outlets. One unsuccessful example in all the episodes is still remarkable. It seems inconceivable that a contemporary lead character would be allowed such a sexless life.

The fourth series begins in strong style. Perhaps symbolic of a big push Roger Marshall returned to write this opener (and indeed the whole of this series) while the most regular director Kim Mills joined him, just as they worked together on the opening episodes.

There is a unique and memorable opening sequence. It shows Marker's prison records and photographs and plays without music. Focus then switches to him in his prison bed, staring into space, re-living the words of the judge as he was sentenced. It's a very powerful opening, highlighting his solitary existence.

Frank is just about to be released, having spent the latter part of his sentence at Ford Open Prison in Sussex after starting in the much tougher Winson Green in Birmingham. His exchanges with prisoners such as Jakeman make clear his lack of interest in interacting and his determination to keep his personality a closed book. The only thing he makes clear is that he will be "straight". The cynical Jakeman explains it won't be so easy. "You've crossed the line...You're not one of them anymore, you're one of us." These words come back into his mind repeatedly. 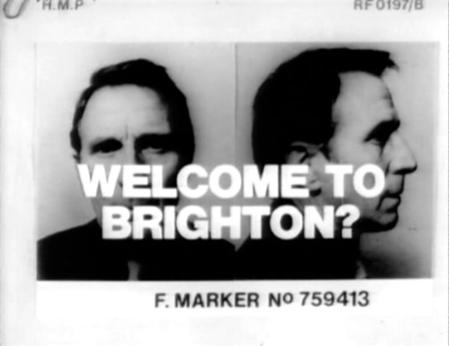