nb This information is indebted to Chris Perry's interview with Roger Marshall in Action TV, Issue 11)

Roger was born in Leicestershire in 1934 and moved into scriptwriting shortly after leaving university. One of the first shows he was involved with was the medical drama Emergency Ward Ten. However he became best known for his work on adventure and crime dramas. In 1962 he started to write for The Avengers, spanning its early videotaped years through to the famous Diana Rigg colour instalments.

He wrote a script for Redcap, starring John Thaw, before embarking on Public Eye, which he co-created with Anthony Marriott and wrote for throughout its ten year. In the first three series he was the most prolific writer and wrote many of the key stories, most of all the climactic "Cross That Palm When We Come To It" when Marker was imprisoned. However it was the fourth series set in Brighton where Roger truly made his mark. He wrote all seven scripts depicting Frank's troubled rehabilitation after release.

The only series to which Roger did not contribute was the fifth in 1971. This was the first one set in Windsor and had Percy Firbank and Nell Holdsworth as regular cast members. Roger explained that he was not too happy with Frank having "warm relationships with ladies in antique shops" and this may explain why he didn't write for that particular block. He did return for a couple more episodes in Series 6 in which only Percy remained and a final episode in Series 7 which saw a last collaboration with director Kim Mills with whom he had worked so extensively in the first four series.

At the same time he was writing for many other series. He wrote the script for the very first filmed episode of Euston Films's Special Branch - "A Copper Called Craven". It was though after the conclusion of Public Eye that he wrote many of his best known scripts. He moved on to The Sweeney, writing a number of well-remembered stories including "Golden Fleece" and "Trojan Bus" featuring wisecracking Australian villains played by Patrick Mower and George Layton. These stories showed that Roger was comfortable with action-led pieces shot entirely on location, in a stark contrast to the studio and character-based style of Public Eye. In a similar action vein he later penned stories for The Professionals.

Among the other productions to which Roger has contributed are Shadows, Survivors, The Gentle Touch, Dempsey and Makepeace, The Ruth Rendell Mysteries, Lovejoy and London's Burning. 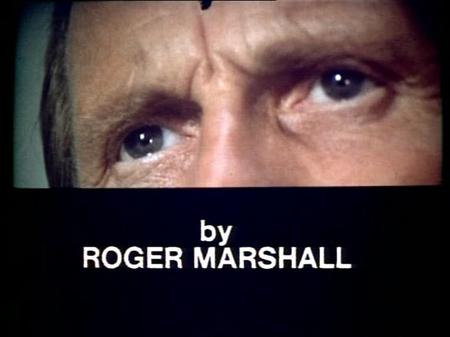 Key figures in Public Eye
Many people made excellent contributions in the making of Public Eye. However the show would not have been the success it was without two central figures - Alfred Burke and Roger Marshall.

(nb This information is largely derived from interviews in the 1960's and 1970's in The TV Times. Refer to those pages for further details.)

Alfred Burke is of course the central figure of Public Eye and integral to is success. His family originally hailed from Cork, moving to Dublin and finally to Peckham where he was born on 28 February 1918. Unlike most actors he had a working class upbringing in a tough area of South London. Fights between street gangs were common and he took part as well.

He left school at the age of fifteen and got his first job as a clerk. Shortly afterwards he became a steward in a club but left following an argument with a barmaid. He tried his luck in Brighton but it was off-season and he found no success. After a spell working in a warehouse he finally found his niche when he earned a scholarship to RADA in 1937.

His early acting career was interrupted by the war. He was a conscientious objector so served on the land rather than in the armed forces. Thereafter acting work was not always available and at one stage he had to address envelopes at the rate of ten shillings per thousand to make ends meet. Eventually he achieved more regular employment, working extensively in provincial theatre, including spells in Nottingham and Birmingham - the latter he discussed in his interview with ATV (included as an extra on the 1971 DVD set). In the 1950's he started to make appearances on TV and film. These were generally small parts and guest roles, usually as villains, in shows such as Danger Man, The Saint and The Avengers as well as long-running series such as Z-Cars.

His big breakthrough and his first major starring part came with Public Eye early in 1965. At first sight Alfred seemed an unlikely choice for a show about a private detective - characters normally seen as young, handsome men at ease with violence, womanising and wisecracking. However this show avoided the cliched image and instead opted for a far more realistic picture of the private detective - someone dealing with everyday problems for everyday people. In this respect Alfred Burke was an excellent choice. Young and glamorous he was not but he exuded dignity, wisdom and experience, all ideal qualities for the job.

When co-creator Roger Marshall first wrote the part he thought of Donald Pleasance - another middle-aged character actor who would have suitably departed from the stereotype. However director Don Leaver suggested Alfred and it was an inspired choice. Roger perceptively said that he was just right because "he didn't look like a private detective" and in a crowd was "just another face". Alfred could convey the right quality of ordinariness but he also astutely suggested changing the character's surname from "Marvin" to "Marker", further distancing it from any "hard man" associations.

For the next ten years he starred in all eighty seven episodes of the show. He still found time for more theatre work and occasional guest appearances in shows such as Randall and Hopkirk (Deceased) in 1969 ("All Work And No Pay") in which he starred as one of two fairly comic con-men alongside Dudley Foster.

After Public Eye concluded in 1975 he had two other major starring parts. The first in 1978 was in the acclaimed Enemy at the Door, a series about the German occupation of the Channel Islands, in which he played a German officer. In the early 1980's he was a key figure in The Borgias for the BBC. He continued to make guest appearances in shows. In the first series of Minder in 1979 he played the owner of a mini-cab company in the story "Come In T-64, Your Time Is Ticking Away". The following year saw one of his best-remembered roles in Tales of the Unexpected ("The Flypaper") as an outwardly friendly but unnerving man who followed a schoolgirl home. Further roles were in Bergerac, Home To Roost (a rare comedy sighting) and, most recently, in Holby City. Other notable film parts in recent times have included the 1996 version of A Midsummer Night's Dream and Longitude. Even into his mid-eighties he continued to act, most recently appearing in Harry Potter and the Chamber of Secrets.

Although Alfred's work on screen is best known his theatre work over the years was extensive and included a spell with the Royal Shakespeare Company as well as a production of Pirandello's Henry IV. Less well-known is that he also wrote some plays under the name of Frank Hanna and one of his pieces was broadcast on ATV in 1964. He turned his hand to poetry as well.

Away from acting he married Barbara, a singer-cum-actress who later became a primary school teacher. They had four children - unusually two sets of twins - Jacob and Harriet (born circa 1957) and Kelly (male) and Louisa (born circa 1961). He led a busy family life in a semi-detached home in Barnes on the border between London and Surrey. He said he had little time left for hobbies but still had plenty of interests. He was interested in football and had an interest in all the London teams although early in life he had been a Millwall supporter. He enjoyed touring stately homes, reading and had a liking for food, especially French cuisine. France was one of his favoured holiday destinations, particularly Bordeaux.

Music, particularly classical and opera, were major interests. Interviewed by The Sunday Mirror in 1971 he said he was recording an LP of songs from his childhood - Irving Berlin-type material - and that it was due for release that Christmas. This was an interesting parallel with another Thames leading man of that era who had a singing sideline - Edward Woodward of Callan fame. However it is unknown whether this record ever saw the light of day. It would certainly have been interesting to hear Alfred in singing mode and like many actors such as Edward Woodward he might have been quite adept in the role. He said he had also played piano and violin and both his wife and children were musical.