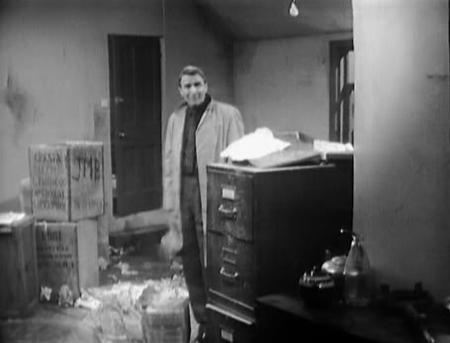 The first of the two series set in Birmingham. Only two episodes still exist - Don't Forget You're Mine and Works With Chess, Not With Life. Home audio recordings of the final five episodes have been recovered, although "Tell Me About the Crab" only exists in small part. "Twenty Pounds Of Heart And Muscle" was released as an extra on the Series 5 set and the others will hopefully emerge at some time.

Transmission details are for ABC and 9.10-10.05 pm unless otherwise stated. Details for other channels can be found down the page.

Joe Lodge is involved in a serious accident and sues the man he sees responsible - Steve Burrell. Lodge says he is paralyzed but Burrell believes he is lying and sets Frank to expose him. However Burrell and Lodge are linked in other ways...

Company director Hugh Maitland is asked to resign after evidence of an affair with Ann Maitland emerges. Hugh admits his infidelity but what is less clear is when to took place - an issue that is far from academic.

The Gannons ask Frank to trace their missing son Michael. He catches up with him inadvertently with unpleasant results. Michael is later tracked down with a woman called Moira but he is not the only one with things to hide.

An inquest finds that Heather Bowen committed suicide but her mother is unconvinced and asks Frank to find the truth. Heather's involvement with a nightclub owner called Don may provide answers but they will not come easily.

Frank is handling security for a hotel and has to investigate a theft from Gallo, friend of a Swiss photographer Kurt Heller. Matters take a rather more serious turn when a disturbing discovery is later made in Heller's room.

Puritanical newspaper owner Minster refuses to take an ad for Frank's agency. However his own marital life is in difficulties and he has to recruit Frank to trace his missing wife. Mrs. Minster though is not the only person who is being investigated.

Catherine calls on her estranged husband Dick for help when a brick is thrown through her window. Dick asks Frank to investigate but other parties though become involved and before long matters get out of hand.

Country vicar Harris Munro suspects his restless wife of infidelity. He identifies her doctor as the likely culprit and Frank pursues his concerns. She is not being unfaithful with Dr. Pringle but she is hiding at least one secret from her husband.

Frank is asked by a solicitor to persuade Mrs. Barnes, an elderly woman and recently widowed, to sell her home. He is uneasy about what seems an insensitive task but soon there will be rather more unsettling reasons for concern.

Frank is employed by Pauline Garrity to search for her father's very valuable racing whippet which has gone missing. He has his own suspect and may take the law into his own hands unless Frank is successful and soon.

Mrs. Wyncherley is furious when she is tricked into buying an already reserved burial spot. She asks Frank to trace the con-man but such a snobbish woman is not as powerful as she seems to think and there are people happy to see her fall.

According to the VTR numbers in the Kaleidscope Guide this was as follows:

Don't Forget You're Mine
I Could Set It To Music
It's a Terrible Way To Be
All the Black Dresses She Wants
You Can Keep the Medal
Works With Chess, Not With Life
It Had To Be a Mouse
You're Not Cinderella, Are You?
Tell Me About the Crab
No, No, Nothing Like That
There Are More Things In Heaven And Earth
Twenty Pounds Of Heart And Muscle
What's Wrong? Can't You Take a Sick Joke?

Perhaps surprisingly the series returned a little earlier on some channels than its "home" region of ABC. Once again though screenings across the regions were not consistent, with TWW again failing to screen the whole series.

Border: as per Anglia

Grampian: as per Anglia

Southern: as per Anglia.

Tyne Tees: as per Anglia.

Ulster: as per ABC.