Who Wants To Be Told Bad News? follows and is a very note-worthy, even controversial instalment. Frank investigates an Indian immigrant and possible con-man. Matters of racism, class and fraud come to the forefront in this fascinating if occasionally disconcerting story. The show made a strong impression among viewers in this month with an average rating of 7.2 million viewers per episode.

The Man Who Didn't Eat Sweets - starring Peter Sallis just before his Last Of the Summer Wine days - is a solid but fairly low-key affair. It depicts a loving, very likeable husband who has a rather cavalier attitude to marriage. The ending is a little questionable as Frank discloses maybe too little of what he knows. Ward Of Court comes next and is more eventful and intense, although only a little better. Once again Frank takes on a custody case without knowing the full implications. Notably this was directed by William G. Stewart, best known for his work in light entertainment and latterly the host of Fifteen To One.

Another fairly moderate story follows - probably the weakest of Series 5 - but even that recovers after a disappointing start. In Transatlantic Cousins an American family try to trace their English ancestors. This lightweight affair is spoiled by the cartoon-like Americans. Its recovery though is down to the superb character of Sir Reginald (David Hutcheson), a rascally fallen aristocrat, one of the finest figures seen in this run.

The final two episodes are a resounding return to form. Shades Of White is the final black-and-white offering and quite superb. Frank tries to solve some thefts occurring within a wealthy but extremely dysfunctional family. The daughter, played by Lesley Anne Down, is astoundingly rude to all concerned The only person who helps Frank is the housekeeper, played by Sheila Allen, an articulate charming woman who certainly takes a shine to him. However she is a former prisoner and the obvious suspect - is she a scapegoat or culprit?

The curtain comes down with another strong story in John VII. Verse 24. This provides a classic conflict of interest case for Marker as a suspended policeman asks him to investigate Firbank whom he has seen liaising with a local criminal. The evidence linking Percy with corruption is very strong and Frank really has to contain himself. Percy senses he is under scrutiny and reacts strongly. The two share some quite electrifying scenes in a worthy climax to the episode and the series.

Curiously this series featured a large number of rather intense and unlikeable female clients for Frank to deal with - Mary Freeman (Well, There Was This Girl, You See), Mrs. Willet (I Always Wanted a Swimming Pool), Maureen (The Beater And the Game) and Jane Holland (John VII. Verse 24). Some other clients could be difficult at times but had their lighter sides. The four above are a particularly prickly bunch. 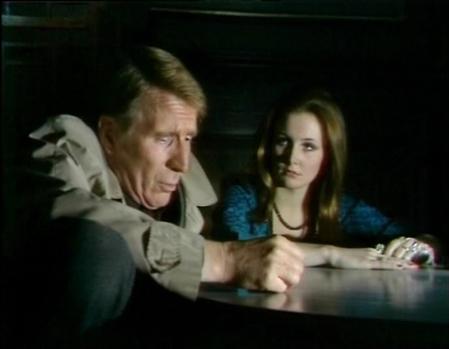 The fifth series in 1971 saw more major changes. The episode run reverted to the standard thirteen after the short one in Brighton. It was intended to be the first in colour but a dispute unfortunately meant that five episodes were recorded in black and white. The titles for all were recorded in monochrome, although when attached to colour episodes the openers were tinted with the text in colour. It was the only series for which co-creator Roger Marshall had no script input.

On screen Marker moved to Windsor, taking up an office at 93, Eton High Street - probably his best-known and certainly most picturesque location. His standard fee was six guineas a day and he even occasionally drove - albeit always a hired car - for brief periods. All the same he was still not much above the breadline and had to take almost any case offered, including many that brought trouble.

Although Helen Mortimer was gone Frank was joined by a major new character in Detective Inspector Percy Firbank, always expertly played by Ray Smith. Firbank stayed until the start of the final series and was always a great asset in the Windsor stories, of which he appeared in about half. Percy was genial and likeable but not without his rough edges.The introduction of a police officer provided fresh dimensions, showing Marker's relationships with the police, particularly interesting given his background as an ex-prisoner. In their first encounters, such as in A Mug Named Frank, there was great suspicion between the two, particularly once Percy discovered Frank's background. Later on relations became more cordial, almost friendly, as the two learned they could trust each other. However even at the end of the series in Shades Of White and especially John VII. Verse 24 there is friction. Personal issues intruding on their respective responsibilities could be a source of conflict throughout their relationship.

light on the life of Peter Kulman

in And When You've Paid the

Bill, You're None the Wiser 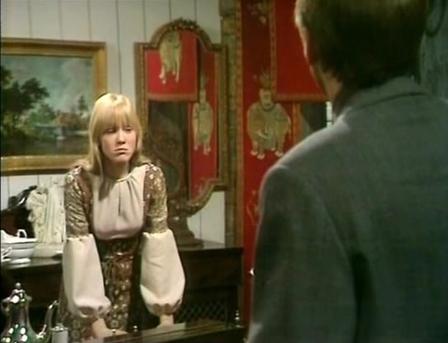 In terms of the episodes this is argubly the peak of the show. There are so many gems, a lot of good support and only one mildly indifferent offering. There is a good start with A Mug Named Frank which provides an excellent link between the stays in Brighton and Windsor as Frank follows the case of a failing businessman to Windsor, and at the end decides to set up shop there. The first case set wholly in Windsor is Well - There Was This Girl, You See..., a marvellous instalment in which Frank tries to recover a stolen necklace and has to deal with a deceptive client, a slippery suspect and a very suspicious Firbank. The last of the three black-and-white openers is another excellent offering, the very tense Slip Home In the Dark. In this case Frank tries to help a young married woman who has been receiving threatening phone calls, but who seems to be concealing information.

The first ever episode broadcast in colour is I Always Wanted a Swimming Pool. This very fine story about a possible art fraud features James Bolam as a modern artist who may have a more traditional sideline, as well as an intriguing minor plot about an errant husband who is discovered at the theatre with a young companion. At the end we do not know whether a fraud has been perpetrated or not and it is the beauty of the show to sometimes leave cases unsolved.

The follow-up couldn't be more different and is almost as good. The Beater And the Game concerns a search for a missing husband that has a sting in the tail. Not for the first or last time Frank is deceived by a client but this time the consequences could be extremely serious. The next story Come Into the Garden, Rose reverts to black-and-white and is another reminder of the programme's versatility. It is a tremendous bitter-sweet account of a relationship between an older woman and a younger man who appears to be taking advantage of her yet at the same time is providing her with a rare frisson of excitement. This theme of exploitation of an idealistic but willing woman had been covered in 1969's The Comedian's Graveyard but this is a very neat and splendid variation.

The seventh story takes an already exceptional run to new heights. And When You've Paid the Bill, You're None the Wiser, the only one written for Public Eye by the prolific Trevor Preston. It concerns a mother's effort to find an explanation for the suicide of her son. It's an intriguing tale, which hints at much darker forces at work, concluding in very poignant fashion. Possibly the most memorable part of the whole series comes when Marker visits the student's remarkably eccentric girlfriend in their very strange room, and she enlightens him on their very peculiar relationship and outlook on life. A brilliant effort in every respect.

Another semi-regular, largely only seen in this series, was antiques shop-keeper Nell Holdsworth (Brenda Cavendish, above). The refined, somewhat Sloaney but very friendly Nell was a useful addition although she paled in comparison to Firbank. Her relationship with Marker provided a neat contrast to that with Percy, being more stable and secure. She could provide Frank with help in a number of cases involving art, antiques and jewellry, as well as plying him with cups of tea! Co-creator Roger Marshall has suggested that maybe this arrangement was too cosy. He may have a point but her introduction did add a new dimension. Restricting her to this series though was probably wise but it was still good to see her make a brief return the following year in Mrs. Podmore's Cat