The Golden Boy arrived early in the new year and with any other series would have been its finest moment. Another lighter story, but one with reflective aspects and quite exceptionally done. Here Frank is asked to trace a remarkably talented student who seems to have vanished off the face of the Earth, despite having so many advantages. In his search he uncovers some motley characters but there serious issues as well, showing how well the show could handle humour and drama.

It's a Woman's Privilege is a solid story providing good support to the top class ones outlined above. Like The Bankrupt there is a focus on a quite complex financial issue but the human story comes to the fore. Marker offers former Brighton landlady Mrs. Mortimer a favour, investigating whether her son's employer is a legitimate businessman.

There are also only two false notes in the first ten episodes. A Family Affair, the first outing of 1973, sees Frank trying to satisfy two brothers discontented at their late father's will. The story and characters don't really come off, although there is some effective humour from Jenny Lee Wright as an indecisive woman considering a divorce. The Windsor Royal, broadcast two weeks later,  is more offbeat as Marker tries to solve the apparent theft of some valuable rose bushes. Again this never really makes an impression and is a rare occasion when writer Philip Broadley's touch deserted him.

Home and Away at the end of January is rather more effective than the two referred to above. Frank is hired by a rather disconcerting if outwardly friendly wife to find out whether a middle-aged football fanatic is being unfaithful . Another strong and more serious story came in the form of Egg and Cress Sandwiches. This still has some appealing humour along the way. A radical vicar is the subject of poison pen letters accusing him of sexual misconduct and Frank's task is to find the culprit.

The series closed in memorable fashion with The Trouble with Jenny. This was Roger Marshall's first script since the first-class Girl In Blue and while a touch short of that standard, largely due to a questionable if powerful conclusion, it remains a captivating tale. There is no room for humour in a story of a suicide attempt and blackmail. Frank tries to find out why an apparently privileged young woman attempted to kill herself and uncovers a web of threats and deceit.

A fine way to finish. A series of highly contrasting stories but several exceptional ones and, bar two slight misfires, a generally

fine standard which more than stands up to its predecessors. What would Series 7 - in just under two years time - have in store?

This may be the best remembered series of all. It is the first to wholly exist in colour, was set in Windsor and has Percy Firbank so it has much in its favour. Ratings were impressive with an average of eight million homes tuning in in January making it the second most watched ITV programme (behind an episode of This Is Your Life featuring Jack Smethurst.)

As Frank is now firmly established in Windsor the serial elements seen in the previous two series don't really come into play. Overall his status is more secure here than in any of the Thames years, although trust and security are things he can never entirely rely upon.

The series got off to a very strong start with The Bankrupt. Public Eye yet again showed how it could take apparently dull, technical material and make a compelling human tale. Frank is asked by his friend Tom Lewis to investigate the highly questionable bankruptcy of a local businessman who continues to live a life of luxury. The way in which the rich can manipulate the system are there to see but the naievity of men like Lewis gives them every opportunity. However even better followed with Girl in Blue. The punning title alludes to a search for a missing woman whose father has just spotted her in a soft porn movie. As in many cases the woman has gone missing for what she sees as very good reasons and the enquiry inevitably opens a can of worms. The story by Roger Marshall - one of his best - is captivating with excellent characters alongside insights into family life and the seediness of the fringes of the film industry.

The show then skipped a week due to boxing coverage - the only instance in its history of a break during a series except at holiday times. The wait for Many a Slip was well worth it. In this marvellous and ultimately poignant tale we see how an apparently routine enquiry into a credit reference for a doctor's wife can uncover some very disturbing details and have even more disturbing effects. To show the programme's diversity the following instalment could not be more different. Mrs. Podmore's Cat is a highly engaging lighter story about some mysterious thefts which occur while Frank is cat-sitting(!) for the wealthy, man-eating Mrs. Podmore. Next up though was a return to serious fare with a vengeance. The Man Who Said Sorry is my all-time favourite episode. Once again an apparently mundane request to investigate an allegedly adulterous wife opens up Pandora's Box. The concerned husband, played brilliantly by Paul Rogers, is an exceptionally difficult, confused and confusing individual. Frank has some very tough decisions to make. Technically as well it is an extraordinary effort with almost the entire action comprising just two characters.

Horse and Carriage marks a return to the offbeat after the previous week's emotional roller-coaster, and very successful it is too. This was the show's only Christmas episode and the story of alleged marital infidelity is immense fun. Probably this episode, which even replaces the standard end music with an easy listening "Ding Dong Merrily On High", is the closest the programme came to comedy but it is capably done. 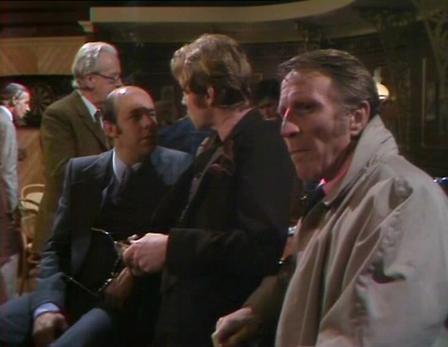 conversation in The Golden Boy 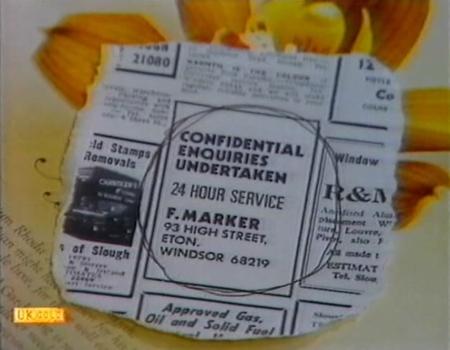