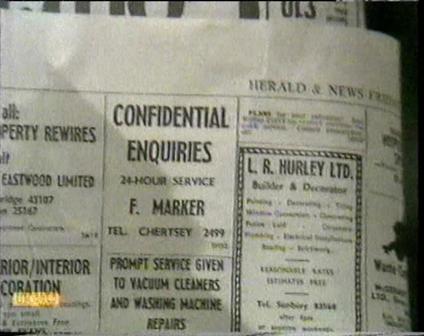 Frank tries to drum up

business for his  new

It does seem Thames wanted the show to carry on but with production transfered to Euston Films, best known for The Sweeney. Euston were renowned for shooting on 16mm film, entirely on location, a format lending itself towards action productions. This action-style certainly would not really have suited Public Eye. Alfred Burke was apparently unhappy with such a proposal and many would share such feelings. It seems a continuation of the show as a video-taped studio-based production was not on the agenda. It's not clear why this should be because Thames continued to make many shows on video including a couple of years later the private detective drama Hazell although that show still had a fair amount of location work and was more in the tradition of a young detective investigating serious crime rather than Public Eye.

It does have to be said that the Euston style  was not bound to result in an action-focused drama. While that was certainly true for The Sweeney one only has to look at Minder (particularly after its first two or three series) to see that the production method could be just at home with character- and story-led drama. However that was less associated with Euston at that time and it's possible the proposition was to focus much more on action and maybe serious crime. Alternatively Alfred Burke may have preferred a more studio-focused show or been concerned there might have been a radical overhaul of writers, directors and production staff that would have unsettled the show. He may have been right but perhaps the show did need a little shaking-up at that point and a more location-focused production could have been successful as long as it didn't come along with a desire for "action".

As it transpired there were no more series. Although the show had remained entertaining and thought-provoking, maybe there were signs of fatigue and a little fall in quality, notably in the Chertsey stories. Perhaps the show would have benefitted from a break of two or three years, maybe to give more time to gather and assess scripts or otherwise look at the best way forward. The beauty of Marker's character is that it wasn't a physical role and so there would be no problem with Marker working well into his fifities, sixties or even beyond. Also as Marker was never affluent it's quite conceivable he would have had to work on for as long as possible and would not have had the option of an early retirement. Perhaps another instructive comparison is with another detective (albeit in police form) - Columbo The character of Columbo was brought back with actor Peter Falk in his sixties and seventies and could still work because it was not a part that relied on physicality and action. The later shows were not as good but still quite effective and perhaps Public Eye could have been brought back even over a a decade later with Alfred Burke still in the role, maybe in one-off productions or short series rather than the longer series of the 1960s and 1970s.

Maybe though it was better to let the show go. It left the scene still performing impressively and later series or "reworkings", "revivals"or "reboots" could have been a disappointment.  A shame that it had come to a conclusion but a marvellous legacy was left which can now be appreciated on DVD and satellite repeats.

It appears that Carlton (the successor to Thames) considered a remake of the programme in the mid-1990's. Nicholas Lyndhurst, best known for his role as Rodney in Only Fools And Horses and generally deemed a comic actor, was proposed for the central role. Although Lyndhurst would have been a surprising and not ideal choice to inherit the role of Frank Marker, there could certainly have been far worse selections. The temptation to go for a really big name was sensibly avoided. The gaunt Lyndhurst would have some physical similarity to Alfred Burke and would suggest that the producers were not looking for an obvious "action hero" type. The actor's background in comedy would be fitting for the lighter stories common in Public Eye and a welcome indication that the remake would not turn into an unrelenting action drama.

However whether Lyndhurst would have been comfortable with the intense and deeply serious stories that also made up a large proportion of Public Eye is less clear. Maybe the best choice would have been a reliable and versatile character actor - just like Alfred Burke thirty years earlier. Unfortunately in a more star-dominated and ratings-conscious age that may not have been possible.

In the event the remake never happened and whether it would have followed a similar mixture of styles and stories as in its original form is conjecture. Almost certainly if it had transpired it would have paled in comparison to the original but with the strong format and tradition it could still have been a decent production. Equally it could have been quite dreadful. It's still not impossible that producers of the future might entertain a remake or reworking and while past fans would judge it with trepidation, curiosity would be hard to avoid. TV producers could definitely make worse choices.

The end of an era... After eighty seven episodes Public Eye came to a close after a final impressive series. A very eventful one as well with Marker having two changes of location and gaining a partner before going back to working on his own, just as he had in the first three series.

The first three episodes are absolutely superb, showing the programme at its best. They form a serial, a trilogy, not unlike the Brighton run and similarly Frank and his future are at their heart. In Nobody Wants To Know Frank investigates a horse-doping racket - with terrible consequences. After treading on some very dangerous toes he is badly beaten and hospitalised. How About a Cup of Tea?, despite its prosaic title, is a very intense story. It chronicles his painful recovery. He is bitter, negative and depressed, dismissive of any efforts to help him. This is a man utterly disillusioned with the world, especially the dirt and misery that his work routinely uncovers. There is a slow and uneven improvement, linked to the arrival of Ron Gash, another enquiry agent. Sadly this episode also marks the departure of Percy Firbank who tells Frank he is being transferred to Reading - a great loss to the series. In How About It, Frank? Marker is rejoined by Joe Martins, whom he saved from a long prison term. Despite Frank's reluctance Joe sets about getting him "compensation" from the loathsome Tarrant. However even that brings Marker and Martins into conflict with the law. Gash offers a timely hand and suggests partnership.

Frank accepts and moves into Ron's plush office in Walton-on-Thames. In the fairly low-key They All Sound Simple at First chasing a debt uncovers a web of family divisions. The next Walton tale - The Fall Guy - is somewhat better and sees Frank deceived by a client and consequently angering a fearsome local solicitor. In What's to Become of Us? Marker has to deal with a client who is not just evasive but a fantasist. These three episodes highlight the contrasting approaches of the two enquiry agents. Gash (a great performance by Peter Childs) is younger, smartly-dressed, very amiable and good at his job. However he is much more mercenary than Frank and rather cavalier with ethics, such as when he betrays the name of one of one of Frank's clients for money. In turn Ron is unhappy, in his cheery way, with Frank's casual appearance and traditional approach. Although an entertaining partnership, this was never going to last. Frank needed his independence and at the close of What's To Become of Us? he moved to Chertsey without any hard feelings.

What has insurer Mr. Boland

(Barry Cookson) got in store

Events in Chertsey got off to an extremely impressive start. Hard Times is a very appropriate title in more ways than one. Frank moves into his new office but relocation has put him in severe financial straits - not that he was ever flushed with wealth. Bills come flooding in while he tries to get a loan from a realistic but sympathetic and helpful bank manager. In the circumstances he cannot afford to turn down a job working for two men who are almost certainly crooks, trying to catch up with a former "partner" who "owes" them money. Unfortunately this man does not take kindly to being tailed and Marker finds himself in dangerous waters, while at the same time a new set of police are watching his every move. The story is a fascinating insight into Marker's character and work. The criminal underworld into which he reluctantly treads bears more than a resemblance to that of Nobody Wants To Know and How About It, Frank?, all of them excellently written by James Doran. The episode is not quite in their league but is very fine nonetheless.Unfortunately that standard was not maintained although the next couple of offerings were still good. In No Orchids for Marker Frank is asked by a rather eccentric old woman to guard some orchids from a seemingly improbable theft. This may seem to be a reworking of the rather humdrum horticultural antics of The Windsor Royal two years earlier but in fact it's much better. The tale is far more engaging and the characters considerably more interesting. We also see that there is serious crime lurking behind apparently frivilous events.

The Fatted Calf followed. It's not wholly convincing but has an unusual and intriguing subject-matter. A young student, son of a major businessman, becomes involved in left-wing activism, encouraged by the aggressive Vince (Alun Armstrong). It's certainly not a flattering depiction of the Left, coming from a programme which generally had a progressive tone. However unscrupulous, manipulative and intimidating characters like Vince do exist and are able to take advantage of others who let idealism cloud their vision. The results for those who get in their way can be unpleasant.

A certain spirit of lugubriousness seemed to inhabit the Chertsey tales and it unfortunately reaches its height (or depth ) with Lifer. Without question this is a balanced and thoughtful portrayal of an exceptionally sensitive topic - the release of a convicted killer and its impact on his victim's father. However the results on screen are very difficult to watch and could have been better delivered. Rather better is Take No for an Answer in which Marker uncovers a fraud by a chief clerk. This is still rather moderate by the show's standards but it does have some great humour in the form of corrupt salesman Ralph Carter (excellently played by Stephen Yardley). However quality dips again with Fit of Conscience, another tale of white collar crime. A clerk feels guilty after accepting a bribe from a builder whose block of flats later collapsed with fatal consequences. Although there are all sorts of interesting issues on show there is a lack of spark.

Unlucky for Some brought the programme to its end. This is better - the best of the later Chertsey episodes - and the involvement of the excellent Philip Broadley as writer no doubt helped. All the same it is not great. Marker is commissioned by a woman to find out whether her daughter-in-law is up to no good. The climax is promising as it looks like Frank may finally get his reward after all the years. 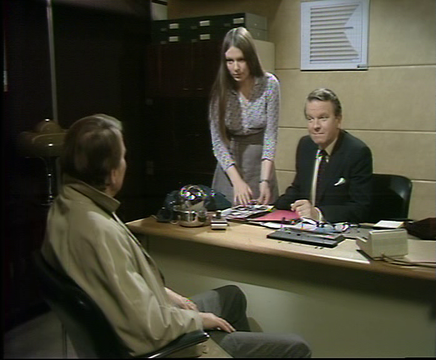