"The death of a girl; malicious gossip; prejudice. A man's whole career in doubt. 'If he's innocent he's being victimised and if he's guilty he's getting away with it.'"

A five minute segment of this episode from the later stages of Series 3 was included on an ABC promotional reel and is included as an extra on the 1969 set. Clearly only surface impressions about it can be gleaned from so small a section but what is seen looks very strong and compelling. Marker is helping a young doctor (played by Zia Mohyeddin, above) whose career is in jeopardy. A young woman patient, Paulette Hinckmann, has died under his treatment. Matters are complicated because he had a previous relationship with her and his conduct is under serious question, not least by surgeon Dr. Howlett. He now finds any hope of a new contract at the hospital extinguished and the medical grapevine could frustrate hopes elsewhere. Involving Paulette's parents to help clear his name presents difficulties as well. Can Frank clear his name?

"The Morning after the Night before - and what a 'night before' it must have been to die of it. Moreover this particular dead man certainly has a tale to tell."

"Young Jago has his eye on the future but how long will it take the gaffer to realise there's monkey business afoot?"

"An interesting proposition for several parties, but who foots the bill?"

According to the VTR numbers in the Kaleidoscope Guide this was as follows:

If This Is Lucky, I'd Rather Be Jonah
But What Good Will the Truth Do?
But They Always Come Back For Tea
It Must Be the Architecture - Can't Be the Climate
Honesty Is the Best Policy - But Who Can Afford the Premiums?
Have Mud, Will Throw
It's Learning About the Lies That Hurts
Memories Of Meg
Cross That Palm When We Come To It
There's No Future In Monkey Business
The Bromsgrove Venus
Mercury In an Off-White Mac
Strictly Private And Confidential

This was the last series of Public Eye that was not networked and also the last before the regional channels were reorganised. On the positive front the two biggest weekend channels, ABC and Associated Television, for the first time broadcast it on the same night. However the picture in other regions was less favourable. Anglia, Westward, Channel and TWW did not run the series at all. TWW's broadcast record for the show had never been good while Anglia had not taken the first series, but Westward and Channel's lack of participation is surprising. 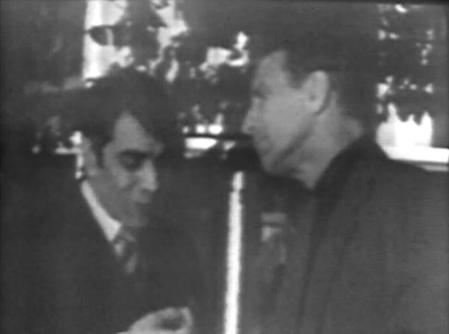 The final series made by ABC and the last one set in Birmingham. This has suffered the worst with only The Bromsgrove Venus surviving intact. A fragment of "It Can't Be the Architecture - Must Be the Climate" remains and was released on the DVD of the 1969 series. The details below are for ABC with broadcast times of 9.10-10.05pm unless stated. For the first time ATV, which at that time held the weekend franchise for London and was ABC's rival, aired the episodes on the same night, albeit in a later slot.

Given the non-existence today of almost all this series it is useful to reproduce some brief synopses from The TV Times of the episodes. In a few instances extra information allows further explanation.

"A wife with expensive tastes.. a husband anxious to please.. People get to know and suddenly the prices get higher!!

"What really did happen on that night of terror fourteen years ago when the Morristown went down?"

"After forty years the wanderer returns. What of the lost girl of his youth? Time has not dimmed her memory; but how to match memory and reality? And find her first!"

"What seems like a straightforward and routine job for Marker turns, because of an accident in the High Street, into a complex human problem."

"A little corruption goes a long way and someone has to pay for it - the innocent along with the guilty sometimes. You only hope that they do come back for tea."

(A businessman is alleged to have used corrupt means to obtain a place at grammar school for his son.)

"Police work comes Marker's way... he moves into new lodgings... and some very strange people find that the wages of sin is - porridge!"

"Why has Brenda left home?... Because of what her parents said to her?... Or are there more sinister reasons?"

"He that diggeth a pit shall fall into it."