Matters concluded in the most extraordinary fashion. Aptly Roger Marshall was on hand for the finale and it is an immense shame that this of all episodes was lost. In "Cross That Palm When We Come To It" Frank ends up being jailed for two and a half years after being found guilty of handling stolen property. If Frank is guilty of anything it is of being tricked after a bogus solicitor entices him to act as a middle-man between jewel thieves and insurers. He is found in possession of the stolen jewels and the "solicitor" vanishes, leaving him to carry the can.

It is hard to understate how remarkable it was for a show to consign its major character to prison. The stars of the glossy ITC series might occasionally face false accusations and even a few hours in the cells but they would always be quickly exonerated without them experiencing the slightest ruffle. In this most realistic of shows by contrast there was to be no escape for the innocent Marker. There was no sugar-coating, no reprieve thanks to last minute evidence. Frank could not hire the smart and expensive lawyer who might have freed a wealthier (and often guilty) client. The fact that innocent people can suffer at the hands of the law while the guilty escape was not shirked.

In many regards this fate for Frank was rather unsurprising. An investigator who often had to liaise with criminals and various shady characters was likely to come unstuck eventually. A more financially favoured operator could have turned down potentially risky cases but Frank did not have this luxury. The future was now not only uncertain, as it inevitably was for an enquiry agent wondering where his next fee was coming from, but decidely bleak. His business in Birmingham was finished. Whatever he did upon release he would be a man with a criminal record in a world which does not easily forgive that fact. Could there be any future as an investigator? The police could be cool towards his kind at the best of times but a criminal record could be the coup de grace.

"You Can Keep the Medal" was the subject of a favourable review by The Morning Star. Marker investigates the apparent suicide of a young woman. Once again a similar case emerged in the form of the splendid And When You've Paid the Bill You're None the Wiser five years later but the two episodes approach the subject in fresh and engaging ways. As always Marker finds some unpalatable details but in neither this nor the later story was there a resort to sensationalism.

Works With Chess, Not With Life is the only other episode surviving in broadcast form from this series. It includes a story thread where Frank is hired to see whether a woman claiming to have contracted food poisoning while staying at a hotel is genuinely ill. Alleged frauds of this nature were a common subject for enquiries but again placed Frank in an awkward position, questioning the integrity of people who may actually be victims. Sometimes they were legitimate, other times he did unmask a fraud but whatever the truth he found he would always uncover a lot more. In this instance he was drawn into a major enquiry about alleged adultery involving the doctor asked to investigate the woman's illness.

The final five episodes do at least exist in whole or part as home audio recordings allowing some more extensive judgements to be made. Only the last few minutes of "Tell Me about the Crab" survive but the others are intact. These are fully reviewed on other pages (Part 1 and Part 2). Although full impressions are impossible given the loss of the visual element these are impressive stories. Probably the strongest is "No, No, Nothing Like That", in which Frank investigates whether the dissatisfied wife of a village vicar is having an affair. However they also include potentially ghostly goings-on at the home of a woman who is doubtful about selling up to a university ("There Are More Things In Heaven And Earth"), an ostensibly comic tale about the alleged theft of a valuable greyhound with a rather dark conclusion ("Twenty Pounds of Heart and Muscle") and a more clearly comic offering where he tries to find a con-man who tricked a snobbish woman ("What's the Matter? Can't You Take a Sick Joke?"). The versatility of the programme was very much evident. 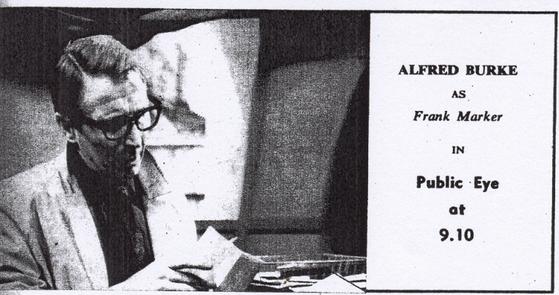 That might have been the end of Public Eye. A remark in the TV Times just before the 1969 series suggested that ABC had decided to call time on the production. It's not clear whether this was definitely the case. ABC was nearing the end of its franchise and in its final stages may have had no time for any more. One could certainly see how imprisonment for Marker could have provided a natural end. However it was almost inconceivable for the screen career of such a honourable man to end in such indignity. Viewers wanted to see what had happened to him and how he would respond to the slings and arrows of outrageous fortune. Fifteen months later he was back on screen, by popular demand, this time on the new Thames station and in a quite different location. That is another story, covered in the pages for the Thames years starting here.

The third series was heralded again with a feature in the TV Times. It was now firmly established and popular. Marker remained in Birmingham. The synopses indicate the familiar mix of serious and more offbeat stories. Sadly this series has fared the worst in terms of survival. The Times offered a rather lukewarm review of the opening episode "If This Is Lucky I'd Rather Be Jonah". Five minutes from an ABC promotional film of "It Must Be the Architecture - Can't Be the Climate" still exist and are included on the Series 4 set. Marker is engaged by a doctor whose career is on the line after the death of a patient with whom he had a relationship. Questions of prejudice arise alongside the tragedy and the surviving evidence is a tantalising glimpse of what seems like a very strong episode. The Bromsgrove Venus is the only broadcast known to exist in complete form and is included on the Series 7 set as well as the ABC DVD. It is arguably the best of the surviving ABC instalments. A librarian is worried that his much younger, very attractive but apparently devoted wife is having an affair. Things though are not quite what they seem and a blackmailer plays a disturbing role as Marker tries to establish the truth and do his best to avoid the disintegration of a marriage.

Public Eye made its debut on the now defunct ABC channel on Saturday 23 January 1965. The first series was the longest (fifteen episodes) and set in London. This was a fairly conventional setting for what immediately proved to be a very unconventional series.

The original first episode for broadcast - The Morning Wasn't So Hot was pushed well down the order and replaced by "All for a Couple of Ponies". It's unclear why this change was made. The Morning Wasn't So Hot features a young woman who goes astray and the depiction of the world of vice may have seemed a little too strong for an opener. "All For a Couple Of Ponies" though immediately puts Frank on what was to become all too familiar ground for him - being harassed by the police. A newspaper review of this does give us a flavour of what appears to have been a promising beginning. Frank falls foul of the police for two reasons that dogged him throughout: resentment at a private detective encroaching on their territory; and a suspicion that he could be involved in crime. He even finds himself in the cells for a time on wrongful suspicion of theft. A neat indication of his cash-strapped condition is him having to use toilet roll to stem his cold instead of a handkerchief!

Nobody Kills Santa Claus is included on the DVD set of surviving ABC episodes as well as being an extra on the Series 4 set. It is a workmanlike rather than outstanding effort but certainly shows potential and improves as it progresses. What is most notable is a lower profile for Marker, with him not appearing at all in the first ten minutes. It's impossible to tell based on such slim evidence but it may be that at first Marker's role was less clear-cut and there may have been a greater intention to focus on other characters. What is clear is that the story picks up as soon as he becomes involved and the producers may soon have realised that he was the show's greatest asset and should be utilised to the full. This is not though to say that the other characters in this episode are weak but that Frank is such a marvellous figure that he needs to be at the centre of events. Although some elements are atypical others are not. For example Frank has to work for a disreputable client (Garston) and ends up on the wrong end of a beating. He is not able to pick and choose his cases but he does insist on being his own boss, therefore turning down the offer of regular work from Garston. This independent spirit was a feature throughout the show.

A controversial episode was "You Have To Draw the Line Somewhere". In Time Screen (Number 14, Autumn 1989) writer Martin Worth recalled that this was the first TV drama focusing on homosexuality. A woman hires Frank to discover if her husband is being unfaithful and is shocked to discover that he is - with another man. He described how permission was required from the IBA before broadcast.

Storylines in the ABC promotional material, listings and the occasional newspaper review are otherwise all that remains of thirteen instalments of this series. More extensive details are available on the episode guide for Series 1 but it can be seen that Marker's investigations covered similar ground to the later years - missing persons, suspected infidelity, blackmail, deception. These details and reviews do sound very enticing and it is a great shame that the evidence on screen is so limited.​​

The second series in 1966 saw a relocation of production and Marker's base to Birmingham. Apparently this was in part at least motivated by ABC wanting to make more use of its Midlands studios. On screen it was explained by him having "crossed influential people in London". That is certainly an occupational hazard for an investigator who cannot afford his face to become too familiar. Visually it had positive results. London has always been overexposed and this was a welcome setting in the provinces. The first series had been almost entirely studio-bound but now the show made extensive use of exterior shooting.

Early evidence of this can be seen in the surviving Don't Forget You're Mine. Marker searches across Birmingham for a missing teacher and eventually finds the man's partner after a frantic search around New Street Station.  Missing person enquiries were one of Frank's commonest assignments but they could be fraught with trouble as in this instance. People who are missing are sometimes missing for very legitimate reasons - trying to escape from danger or harassment - and the clients seeking them do not always have the worthiest motives. Those facts are certainly true in this case and would happen again in the future in episodes like The Beater and the Game from 1971. Unfortunately Frank was rarely in a position to turn down such work and could not help but open a can of worms in such instances.