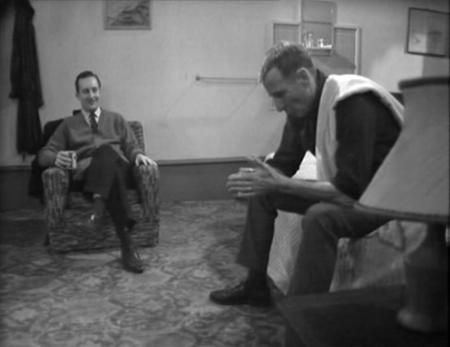 Eventually Enright persuades Frank to visit the local pub. At the bar he spots a burly biker, Harry, trying to perform a con-trick on the unsuspecting landlord. He and his mate Frank had successfully pulled the same stunt on a cafe owner earlier in the day. Frank warns the landlord, causing Harry to react violently, attacking him. The two rockers storm out, Enright unable to stop them. Frank's intervention did save the landlord some money, and he is grateful, but all concerned are shaken.

That is not the end of the matter. On leaving the pub the two bikers roar past Marker and Enright on their machines. Later on they rev' menacingly outside his digs. Much worse follows though the next day when they find Frank repairing a wall on the seafront... 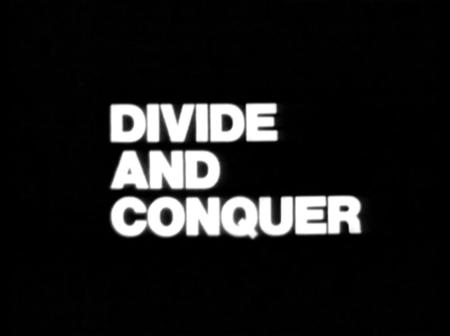 Frank starts work as a free man for Kenrick's, a local building firm. His first day at work goes fairly smoothly but he is still adjusting to life outside prison. Back at his lodgings he is well-looked after by Mrs. Mortimer but is resistant to mixing with the other parolee Enright. This is despite the efforts of the urbane Enright, a disqualified solicitor, to make contact.

Another solid episode that tells us an awful lot about Marker. Early on we see his independent spirit, bordering it has to be said on rudeness, in his treatment of Enright but this is an unusually vulnerable time for him. Later on though we see his bravery and refusal to stand by when he sees others being abused. Most people would have turned a blind eye to Harry's con - many reasonably because they were scared of retaliation - but Frank feels he must intervene. A telling comparison is when the cafe owner visits the police and the Sergeant almost laughs away his complaint, telling him he has no real chance of getting justice.

On the seafront he is put in a very frightening situation and it is clear at times that he is scared. This shows far greater realism than the ITC heroes who regularly faced life-threatening predicaments without batting an eyelid. However he stands up for himself - not by fighting in true ITC style, because he would have no chance of success - but by using his wits. His knowledge of the law and prison certainly helps - he speaks not theoretically but through bitter experience. The stand-off between him and the bikers dominates the final part and is a very tense, riveting affair.

The two thugs are an unpleasant pair. Harry is a dangerous character, clearly used to abusing others and bullying them into submission. He has no scruples about using violence. His sidekick Frank is rather less clear-cut. He is less confident, the sort who could easily get misled by the likes of Harry, but he has a certain common sense that makes him more responsive. Marker knows where to target his appeals. Richard O'Callaghan does a fine job here.

William Moore makes the first of two appearances as Kenrick while Tania Trude does the same as his young, pleasant, pretty secretary. Ken Jones is always a welcome sight and plays the hapless cafe owner who falls prey to Harry's trick. Peter Cellier, a stalwart of gentlemanly roles, is just right for the part of Enright, the disgraced solicitor who is a little further down the parole road than Marker. Enright and Marker don't quite click, clearly coming from different worlds, and Frank has learned the hard way to be wary of solicitors. Even so he does make an effort and one wishes Frank had been more receptive.

It says something for the quality of the Brighton series that this is one of the less notable stories from that run. It is still intriguing though and charts another hard step in Marker's return to public life. 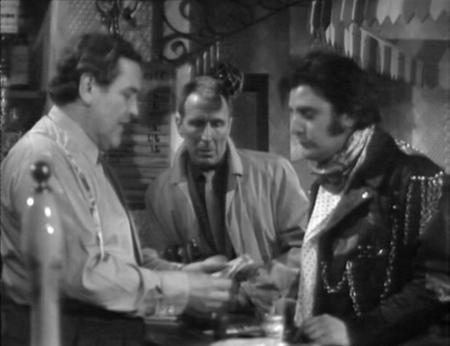 the landlord and a fateful