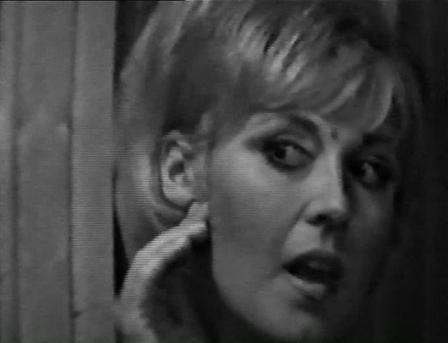 In the final stages of the episode enquiries lead Frank into the unexpected arms of dance teacher Pauline Busby. First he meets her bubbly and slightly flirtatious assistant Jackie before steeping up for "special tuition" with the lady herself. There are some nice, good-humoured sequences but there is still some serious business to conduct which he does with typical aplomb. Pauline's attitude towards him seems somewhat ambivalent - at times she is ruffled by his approach but there are moments, notably one when she preens herself after his departure, where she strikes the viewer as being rather impressed with him. This ability of Frank with women is one regularly seen on screen and perhaps if he decided to pursue them romantically he would have had some success.

Marjie Lawrence makes her debut guest appearance as Pauline, and a fine job she does as well which may explain why she was asked back for three more parts in the Thames years. The only complaint might be her rather variable accent. It starts off as Birmingham before generally settling for flatter vowels, occasionally lapsing into her own more refined tones. It's possible this was deliberate, intended to show that Pauline is a woman of fairly humble origins who has tried to refine her accent and develop a few "airs and graces" but not quite managed to do so consistently.

Generally a problem in the Birmingham series was that the local accents could be a little caricatured. There were very few actors whose primary accent was Birmingham or West Midlands, or indeed any local accent in those days. Therefore there are many instances of actors attempting the accent, some with success, others less so. The Birmingham accent is often delivered in a very caricatured way, sometimes for comic effect, and that tendency - unintentionally - occurs at times in Public Eye. A better answer might have been to allow actors to use their own accents unless truly comfortable and skilled with the Birmingham voice. Unsurprisingly such problems rarely occurred when the series located to middle-class, Home Counties Windsor when actors could almost exclusively use their preferred tones. However these reservations are minor, and setting the show in Birmingham was extremely welcome.

There are some notable period aspects. Although Marie is childless, and not married to an especially wealthy man, she has no job. Today it is routine for married women, except those with very young children, to work outside the home. Perhaps staying at home has caused her to feel frustrated and prone to temptation. Paul addresses his assistant Ingleby by his surname, as if he were a schoolboy. This hierarchy and way of dealing with junior colleagues seems inconceivable in these less and deferential formal times.

There are one or two question marks over events in the story. Why does Marie go to see Frank - the same enquiry agent as her husband? Coincidence? The resolution doesn't seem wholly satisfactory although it is plausible. However these don't really trouble the viewer and the talented and versatile writer Anthony Skene should be commended on a fine job in what unfortunately was his only script for Public Eye. Altogether the results on-screen are highly accomplished.

It is such a shame that so many episodes are lost from this series in particular. Worst of all is the loss of the shocking climax three weeks later when Frank's luck ran out and he was sentenced unfairly to prison. At least though we have this evidence of the show's quality at that time. 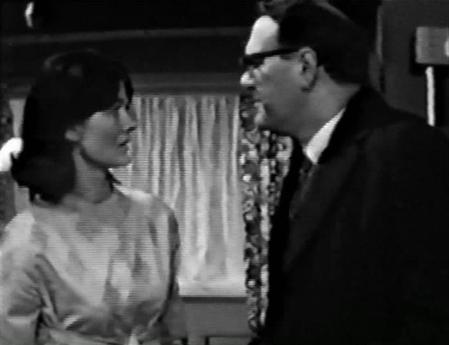 A photographic exhibition has opened at the local library. One particular exhibit, The Bromsgrove Venus, excites particular attention. It shows a nude woman, pictured from the rear with her face reflected in a mirror, clearly modelled on Velazquez's The Rokeby Venus. The chief librarian, Paul Ainsworth, is shaken when he sees the image because he recognises the woman - it is his wife.

Frank is also at the library and Mr. Ainsworth explains the situation to him. He is a middle-aged man who has been married to his wife Marie for ten years. She is much younger, very pretty and French. He fears the worst, assuming that she is having an affair. The photo was submitted by his young assistant Mr. Ingleby whom he believes must be her lover. He is evidently upset and lacking in self-confidence. He wants Frank to ascertain the exact facts, unable to ask his wife himself.

Frank goes to Ingleby's house. It's a curious scene. The urbane young man is dressed in a kimono and is listening to Japanese music. He explains that he is a keen photographer but denies taking the picture, or having any relationship with Mrs. Ainsworth. Further enquiries at the local camera shop reveal that Ingleby does not get his prints developed there but that an enlargement of a nude similar to that in the competition was stolen from it recently.

Ingleby is the obvious suspect and confesses. Frank tries to find out from the shop assistant who shot the photograph but without success - the only address is a box number, care of Nora's Tuck Shop. The photographer ordered seventy two copies of the same picture - but for what purpose? Marker needs to find out who took the snap and his relationship, current or past to Marie while the Ainsworth marriage seems to hang by a thread.

An extremely fine story in the only surviving full episode from Series 3. It is familiar territory - marital suspicion and ultimately blackmail - but it is exceptionally well done. There is a great sadness on offer here. Both of the Ainsworths comes across as very unhappy figures. Paul is a very fragile man who crumbles at the news of his wife's apparent affair. He acts as if the marriage is already doomed, despite his wife's affectionate nature. He sees himself as incredibly lucky to have her and now believes she is slipping away.

Marie is perturbed at her husband's sense of withdrawal and lack of spirit. She knows there are problems but he won't tell her. She seems a pleasant woman but things are going wrong. When she discovers the offending picture has been captured on the front page of the local newspaper she knows her secret is out but, just like him, is unable to discuss the matter and try to sort it out. It transpires that this picture has been haunting her for years but the worst seems yet to come.

Leon Sinden and Sylvia give excellent performances in these central roles, skilfully conveying the anguish of two people who are trapped by their inability to communicate with each other. It's perhaps a touch surprising that Mr. Ainsworth has managed to marry such an attractive woman. He appears to be rather intense and unremarkable. Perhaps there is a connection that is not so evident and she sees qualities in him that are not clear to the outsider. Possibly it is to her credit that she has married a man with whom she feels an affinity, irrespective of appearances. (Indeed it may give hope to many a middle-aged, apparently uninspiring man that he might marry such an appealing woman!) However there may be much to the two characters and their relationship than meets the eye. There is definitely an underlying diffidence they share: unfortunately that diffidence is one of the reasons they cannot resolve their difficulties.

Timothy Carlton makes one of his earliest and capable appearances in a typically urbane, somewhat sneering role as assistant librarian Ingleby. Ingleby seems quite happy to undermine his superior and discomfort him, although whether he has any deep malicious intent is questionable. Despite his moderately paid job he lives in a very smart flat so either benefits from a moneyed background or the generosity of others. There is a certain resemblance in his persona to Sheldon, the jewellery shop assistant in Well - There Was This Girl You See three years later. Both are rather arrogant young middle-class men although the latter lives in a more humble bedsit. However Ingleby is rather more easily subdued.

It may be that Ingleby has a wealthy partner. Towards the end of his discussion with Frank an older man in an evening dress arrives, clearly expected, and Ingleby's discomfort is palpable, as is Frank's realisation. The implication is that Ingleby is gay and the man is his boyfriend. However the story does not make a big issue with this, or adopt a lurid approach. This is to the credit of Public Eye that it was prepared to cover such relationships but without resorting to sensationalism.

Frank's visit to the quaintly named Nora's Tuck Shop in search of the name of the photographer uncovers anything but a quaint scene. The owner, Nora, is a dreadful woman who never removes the cigarette from her mouth while she barks her suspicious and mean-minded words. There is little doubt that her shop is a conduit for criminal activities and her question, "Are you a copper," makes it clear that she has plenty to hide. She makes no effort to help Frank although it later appears - unsurprisingly - that money has a way of making her more willing, albeit in a very calculating and sneering fashion. Daphne Heard frequently played unsympathetic characters and handles this memorably unpleasant part with skill and a touch of humour. Humour also derives from the camera shop assistant Flo, another who gives Frank a difficult time albeit with a softer edge.