This is a strong story, quite a serious tale but it still has a certain leavening of humour in the best Public Eye traditions. The divisions among the central characters are well depicted while the questions of whether the vicar has been up to no good and who has been behind the letters bubble away.

Story-lines involving clergy and religious issues were very rare in Public Eye - perhaps surprisingly so. "No, No, Nothing Like That", an episode from 1966 that exists as an audio track, is the only real equivalent although this time the accusing fingers point at the vicar rather than his wife. Brian Blessed impresses as the strong-minded but quite accessible clergyman. The tension between traditional and new religious thinking are clearly drawn. Felcourt and it seems his fellow villagers favour the old ways, with the vicar respecting old hierarchies and traditions while confining religion to spiritual matters. On the other hand Pratt sees religion in a social - very probably socialist - sense. His lack of deference for wealthy families like the Felcourts is plain to see. He is not prepared to accept the Felcourts' attempts to use their status as church benefactors to dictate modern church life. His determination to challenge the establishment chimes with Frank's own approach but the latter of necessity has to adopt a more low-key style and simply get on with his work. It is hard not to admire Pratt in these respects, whether or not the allegations about his private life are true.

The other side of the debate is well handled as well. Felcourt has his differences about Church matters with the vicar, and he oozes a sense of superiority, but he is also a very fair man who does not try to use the letters to bring Pratt down. One does feel that he hopes the allegations are false and simply wants to find and silence the culprit.

An awkward conversation between 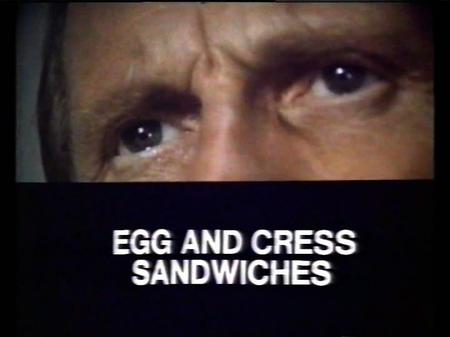 Percy tries to get answers from Cobden 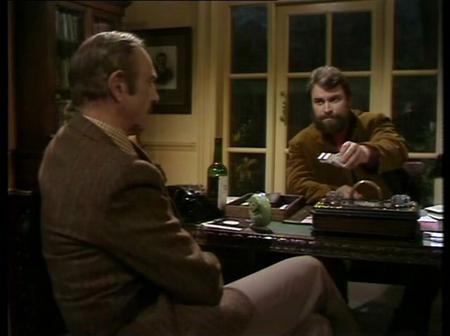 Anything but conventional is his eccentric brother Cobden who provides much of the humour in the story. Cobden represents another side of upper class life - a frivilous, devil-may-care attitude. He engages Frank in a bizarre discussion about the meaning of the name "Marker" and is preoccupied with his agricultural "museum" of which it is clear his more conventional brother has a very low opinion. On visiting the family home a monkey is found in an enclosure and it seems fair to assume the exotic pet belongs to Cobden!

Another rather more disturbed personality is found in the form of Alice - the vicar's first wife. She lives in a room in a house in London and has had some sort of breakdown, which may be a reason why her marriage to him was annulled. He goes to visit her and she is a distant, unfocused figure, scribbling crude pictures. He wonders if she might have written the letters and subtly questions her to that effect but her condition and the fact that the letters were posted locally seems to rule her out.

Humour doesn't just come from Cobden. There is a nice scene where Percy is leafing through an "art magazine" with nude pop-art style paintings of women. Frank catches him and he hurriedly closes it. He claims it was left in the cells but Frank seems a little unconvinced! The solicitor who hires Frank is another slightly eccentric, rather effete character who expounds on the quality of the egg and cress sandwiches that give the episode its title. Angus Mackay is in fine form and specialised in these very genteel authority figures who border on campness.

The other cast members impress, including Lynn Farleigh who plays the vicar's current wife, an attractive and likeable woman. She is a little put out though when Frank mistakes her young daughter, hooded in a pushchair, for a boy! The direction by Graham Evans is some of the boldest in the programme's history. There is some interesting camerawork and use of high shots, very notably one of Pratt crossing a very busy road to see Alice. When Frank encounters Cobden on the family estate there is jerky camerawork tracking the pair. The unusual direction is not completely successful but unquestionably makes an impression.

There are maybe some question marks about the ending. The conclusion seems a little too predictable and straightforward, depicting an outcome that seems surprisingly overlooked by the main characters. The story suggested that there might have been some more dramatic events or revelations and the actual result feels a little anti-climactic.However these are minor concerns regarding another fine piece of television. 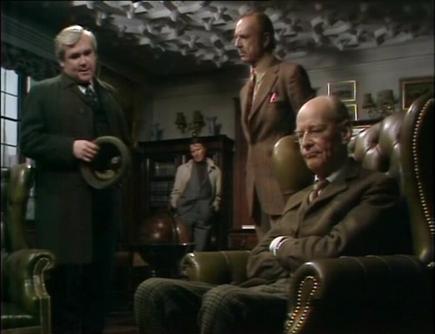 Church warden Major-General Felcourt goes to see Percy Firbank, alarmed by "poison pen" letters he has received about his vicar which accuse of him sexual impropriety. The warden wants to find out the culprit. Percy tells him that a police investigation could "stir up a lot of mud" and suggests a more discreet approach - an enquiry agent.

A solicitor, Peter Palfrey, sees Frank. He tells him about the letters and that he is working on behalf of Felcourt. He explains that prosecution is not on the agenda so Frank's services would be more appropriate. Frank takes the job but is curious as to why such work has come his way. He speaks to Percy for an explanation and gets the impression that the "establishment" are trying to keep things quiet and protect themselves. He goads Percy gently on this matter, and the latter takes his points in quite good spirit.

Frank speaks to Felcourt and discovers that the parish is divided over the vicar, the Reverend Pratt, who is a fairly recent arrival from Doncaster. Those in the old village such as himself are concerned about the vicar's efforts to change things while others, particularly on the new estate, appreciate his new ways and determination to reach out to people. Felcourt has specific concerns over the vicar's wishes to sell a painting donated by his family in order to raise funds for a "Workers in the cause of Christ" group.

Frank goes to the vicar to ask if there is any truth in the allegations. Pratt is angry at the suggestion and believes enquiries will simply blacken his good name. He cannot though stop the investigation. Is the vicar a serial adulterer? Who has been making such biting allegations?