get through to his wife 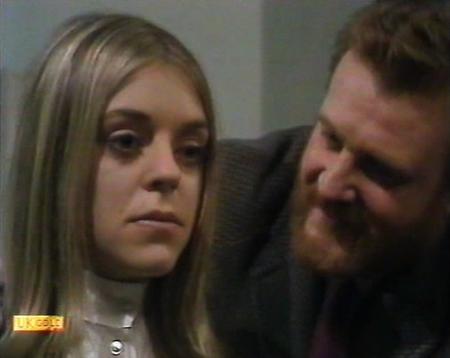 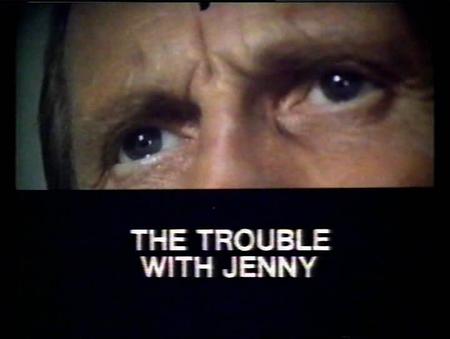 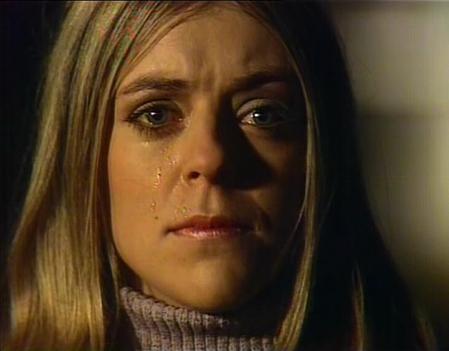 Why is Jenny (Petra

The sixth series closes with a fascinating and dramatic tale by Roger Marshall. The ending is not wholly convincing but there is enough here that is compelling in the show's best traditions. Blackmail, deception, secrets and despondency are familiar and tried and trusted ingredients which mix with great success.

The opening moments provide one of the most poignant beginnings to an episode as the distressed Jenny watches whom we later discover to be Patricia with her baby and husband. Why is she upset? Is it sexual jealousy? Has she lost a baby herself? Is there some other reason? A movingly enigmatic start. When Jenny turns up at the hotel and asks for change she is, by complete contrast, bright and friendly. Her later suicide attempt though makes it clear that her earlier feelings were anything but dispelled.

Jenny recovers but remains a mysterious figure. Her husband outlines her troubled past, her frequent disappearances and mood swings. The reasons for these are never clear. Arthur seems to be a very pleasant man who has done all he can for her but maybe marriage to a middle-aged farmer, however kindly and wealthy, is not enough for the young and restless Jenny. Indeed Arthur's kindness borders on indulgence and one suspects that had he taken issue with her over her wanderings she might now be rather more happy and settled. There is a very telling scene where he first visits her in hospital. She appears to be asleep and tenderly he slips her wedding ring back on to her finger and leaves. At this point she suddenly opens her eyes and looks almost reproachfully at the door he has just exited. This event may not have healed their marriage.

At night a young woman tearfully looks from a distance into a house, watching a young mother playing with her baby while her husband downstairs pours a drink. Meanwhile Frank checks into a small hotel near Paddington station after he overslept on the train and missed his stop.

The young woman actually turns up at the hotel, where she is staying for the night, and politely asks the owner, Mrs. Barnes, for five penny pieces for the phone. She is able to oblige but Frank later points out this is peculiar because the phones no longer take these coins. Neither thinks any more of this but early in the morning Mrs. Barnes frantically calls Frank after failing to get entry to the young woman's room. She can smell gas and he kicks down the door to find the young woman unconscious and not breathing after an apparent suicide attempt. He gives her mouth-to-mouth resuscitation and fortunately she survives.

Later on a detective calls at the hotel and quizzes Frank. On discovering that he is an enquiry agent he suspects him of some sort of dubious involvement, maybe even that he has taken a suicide note which he could use for blackmail. He grudgingly accepts Marker's innocence but remains wary, telling him to stay on in case of developments.

Frank checks the woman's belongings and discovers her name - Jenny Wellard. The details of an Arthur Wellard are found as well and he is called down. Frank gives the shocked Mr. Wellard the details and gets some background. He says Jenny's behaviour is inexplicable - she has everything she needs. Frank has understandably assumed that the middle-aged Mr. Wellard is Jenny's father so he is taken aback when he says he is her husband.

Arthur wants to know why Jenny did this but doesn't feel able to do this himself so he asks Frank to step in. Frank finds names in Jenny's address book and decides to seek them out while she recovers in hospital. The first woman he meets is a Patricia Russell. She is very wary on meeting him and assumes he is a man who has been blackmailing her. He clears up this confusion and she explains she is being blackmailed after secretly giving birth in a nursing home in 1967 - the baby being given up for adoption. Jenny and two other women were in the same nursing home under the same circumstances. She assumes Jenny was driven to desperate measures by a similar threat. Frank discovers that one of the other women has received a blackmail letter (the other woman died in a car crash.) Who is the blackmailer? Will Jenny be able to repair her life?

Petra Markham and Donald Houston acquit themselves well in these central roles. Petra has a demanding part to play, with a wide range of emotions and an enigmatic personality to display. She particularly impresses in the emotional first scene, for which director David Wickes in addition deserves much credit. She has the fresh, wide-eyed look that would certainly appeal to many men, especially older ones like Arthur. Donald helps to make Arthur a very sympathetic figure.

Jenny's suicide attempt brings back memories of similar events in My Life's My Own from 1969, also written by Roger Marshall. In both stories Frank saves a young, troubled woman; in both he has to break down the door to find the victim unconscious while the radio plays. In each case there were real doubts that the women genuinely were trying to kill themselves but rather were crying out for help. Jenny's predicament though is much more serious as she has stopped breathing and, whether intentional or not, she comes within a whisker of death. Frank developed a warm if fleeting relationship with Shirley in the earlier story but Jenny is immediately taken off to hospital; when he does make contact with her she displays a more defensive attitude. A harsh critic may be concerned at the similar story-lines but two suicide attempts in eighty seven episodes is hardly excessive and there are interesting variations in events.

When Frank first discovers from Patricia that the women stayed at a nursing home he suspects abortion but that was not an option for them at that time. Illegitimate birth would scarcely raise an eyebrow these days but secret births and handing over babies for adoption may still do so, and this is what the blackmailer seeks to exploit. Both Patricia and Sarah - the other victims of this threat apart from Jenny - think Frank is the blackmailer when he makes contact and are very wary before he corrects their impressions. In Sarah's case she has invested in some "protection" and Frank comes close to retribution before he explains himself.

One of the highlights of this episode in a minor role is Donald Burton as the distrustful Detective Sergeant Colin. This fine performance makes all too clear his view that Frank, like other enquiry agents, is up to no good and probably a criminal himself. Frank stands up for himself and their exchanges crackle with tension. Colin is all to happy to disrupt Frank's plans and discomfort him before eventually letting him off the hook.

Another appealing role is that of Mrs. Barnes, well conveyed by regular Public Eye guest Marjie Lawrence. It is quite clear that Mrs. Barnes is attracted to Frank and she drops him little flirtatious hints which he chooses to pass over. No doubt in a show today a contemporary Frank would be all too happy to seize on these but it is part of the Marker essence that he keeps clear of physical encounters or relationships. There is an air of loneliness about Mrs. Barnes. It's not known what has happened to her husband - there is no sight of him - and her guests, as she wistfully remarks, are almost all "one-nighters" so relationships may pass her by.  All the same Frank is not an unreceptive man and there is an appealing warmth in their passing acquaintance.

Among the rest of the cast Doreen Mantle, the future Mrs. Warboys in One Foot In the Grave, makes an early TV appearance as a nursing sister, although she is barely recognisable behind large glasses and what may be a dark wig. Richard Simpson plays a well-spoken, suspicious solicitor who is yet another member of that profession to give Marker a hard time.

It is the final stages that really raise the questions. Frank discovers the identity of the blackmailer in perhaps a rather cliched manner with a chance discovery. Alfred Burke turns in a marvellous, angry performance at this climax.; the behaviour of his antagonist though is open to debate. There is though a real magnetic quality to this showdown that really makes it stick in the memory to round off another memorable episode.