Clients normally meet Frank at his office but his latest one, Madge Reading, surprisingly asks him to meet her at home. Madge appears to be a pleasant woman but she is clearly nervous. She chatters on all sorts of trivial matters before finally outlining her concern. She believes her husband Don is having an affair. When Frank probes the matter though he finds very limited evidence has provoked her suspicion. She could smell perfume on his jacket last weekend and has noticed a cooler attitude on his behalf. She also notices "the silences" she encounters when entering a shop - in her view a clear sign people have just been talking about her and feel sorry for her predicament. Frank expresses his reservations but she still asks him to investigate.

Don works at a local factory and in his spare time runs the works football team. Frank goes along to watch the team play and finds Don running the line while shouting frustrated instructions to his team. Frank gets him talking and shows an interest that is appreciated. A player is injured and Frank calls for an ambulance which impresses Don. Don actually was a professional player before a serious injury ended his career but he still loves the game and managing the team keeps him in touch. 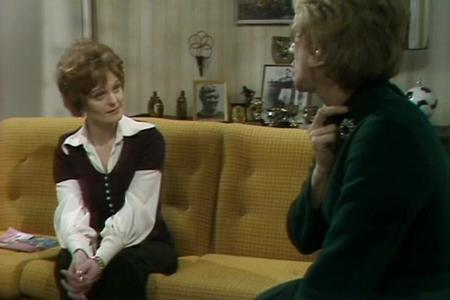 After the game the pair go to the pub and much of their chat is about football which gets on the right side of Don. Frank is intrigued to see a middle-aged woman, Gladys Mottram, spark up a friendly conversation with him and later he sees him go round to her house. However this seems to be a false alarm as Don merely drops off the team kit for washing before leaving.

All the evidence seems to show that Don is not "playing away". However Madge is not at all reassured by the findings. Frank becomes a little frustrated by her fussy and peculiar manner and aims to drop the case but she is a hard woman to convince...

Another very good, engaging episode. It's not quite as impressive as some earlier in the series but - dare one say it for a footballing tale - it is a solid "second division" effort which does its job well. It's a little on the less serious side of the story spectrum but remains a broadly straight style. Bryan Pringle is probably best known as a comic actor but is essentially "straight" in this role while his wife's behaviour is more "funny-peculiar" rather than "funny ha-ha". Bryan fits the role of Don well - a quite affable man, not particularly domesticated but by no means boorish. The only reservation is his use of a vaguely southern accent which doesn't quite sound right from a firmly northern actor.

However it is Madge who is the much more remarkable figure. One can understand suspicion crossing her mind with her husband spending a lot of time out of the house, and footballers do tend to attract the girls. Frank though quite correctly points out to her though that these are "girls" - and Don is a middle-aged man. There is a very amusing exchange when Madge asserts that girls find middle-aged men attractive and the distinctly middle-aged Frank replies that he thinks that's a rumour - put about by middle-aged men! As the story develops so does Frank's frustration as it seems evident to him that not only is there no infidelity but that Madge is either deluded or playing some sort of game. 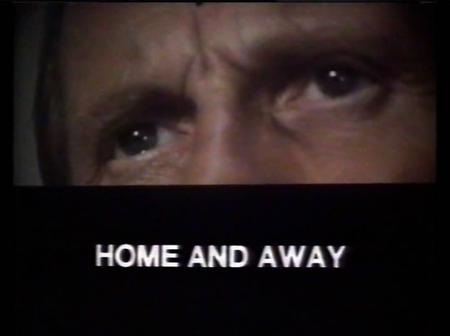 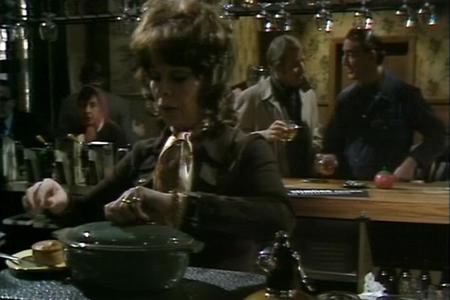 Don and Frank at the pub

await their food from  the

with her neighbour Phyllis

The ending is rather peculiar, at least on first impressions, and raises all sorts of questions about Madge's behaviour and motives. While it can be an advantage to leave some questions unanswered at the close of a story there is maybe a little too much mystery as to how things have developed. Madge is certainly one of Frank's most frustrating female clients, even if she has at least a redeeming surface friendliness.

The football setting is a neat variation and works well. Some shows would have ill-advisedly set events in the world of professional football and we would have had the silly spectacle of professional teams with invented names or dismally unconvincing playing scenes. It is typical of the down-to-earth nature of Public Eye that this is avoided. Sensibly, and much more realistically, parks football is the subject. The playing scenes have the right sort of ramshackle quality and are fairly convincing, except when one player goes down "injured" after a quite innocuous challenge (perhaps that is actually all-too realistic!) Don's team are anything but glamour boys and are heavily beaten but as the true enthusiast he keeps going.

A picture in the Reading house shows Don at the peak of his career when he was twenty - it has to be said the picture of a barely-disguised contemporary Bryan Pringle makes the young Don look the oldest twenty year old ever! Madge just endures this passion for football and like a lot of wives, especially in that era, reluctantly settles for her second division status. However once she suspects that her husband's real love is no longer football but another woman she decides to take action.

Frank confesses that he is not a football fan, which slightly surprises (and a little disappoints) this viewer. One might have imagined that a man of his background would enjoy the game, although it's possible that as a loner team games might not really suit him, or that he might have been a fan before becoming disillusioned with the modern game. Perhaps it's symbolic of his detachment from the wider world and his enigmatic personality - his likes and even passions are a mystery and what is leisure to men like Don is just work for him. All the same Frank is a good analyst and his point about the modern game "just being a branch of big business" is even more relevant today than it was almost fifty years ago. His use of the word "soccer" though does betray his lack of knowledge of the game which is always "football" to the committed fan!

The supporting cast has little role to play. However it is notable to see Barbara Keogh in her fourth and final guest appearance - a joint record she holds with Margie Lawrence. She plays Gladys beneath an extravagant mane of grey hair with the right balance of friendliness and flirtation. Mike Grady has a very small part as one of the footballers which is rather fitting as in his other role in The Beater And the Game he played an amateur boxer.

Frank's surveillance of Don's visit to Gladys does raise a few questions. He visits at night and, as Gladys switches the kitchen light on, he is peering in close to the window-sill. This does seem remarkably risky, with a very high chance of being discovered. If Frank were caught in such circumstances he would be considered either a peeping tom or a prospective burglar - in either case the consequences would be serious. It should be said that an experienced and skilled enquiry agent like Frank is probably far more adept in avoiding detection and knows just the right time to make his move, but the margin for error is very small. No doubt there would be slip-ups (The Beater And the Game provides a graphic and shocking example) and he may have learned from brutal experience how to be exceptionally discreet.

The same question applies to his "courting" (for want of a better word) of Don. There would always be the risk that a client would find out his real identity and profession. There would also be the difficulty of slipping away from an embryonic friendship as developed in this case. Perhaps some of these problems could have been examined in episodes - possibly the show, as in this instance, could make surveillance look a little too straightforward.

Despite this reservation this is another successful episode within a strong sixth series. It's even possible to hear tracks by Cat Stevens and Elton John ("Crocodile Rock") in one of the pub scenes. Tracks by recognised artists are usually removed in archive DVD releases to avoid clearance problems but these, thankfully, have survived.

The episode was recorded on 20th December 1972.