The plot around Brian Hart is no less entertaining and intriguing. Brian is well played by John Hallam, a very frequent face in seventies TV. He is a sociable and likeable man rather too fond of drink and neglectful of his wife. He is unhappy with his job and wants to be a lecturer - but can he afford it? He strikes an immediate rapport with Frank who gains his trust expertly. His wife, a model (Mary Tamm), is also a pleasant individual who is worried about Brian. However she seems too happy with a comfortable life and doesn't fit Brian's idea of the domestic, dutiful wife. Frank, in a rare piece of sexist advice, suggests that she "learn to cook" to repair her relationship. Lots of marriages have these sorts of tensions and dilemmas, which are very well depicted.

At the end Ron Gash repeats his offer to Marker of joining his Walton agency. The prospect of a partnership between these two super characters rounds off a magnificent set of episodes that marks the show's peak. 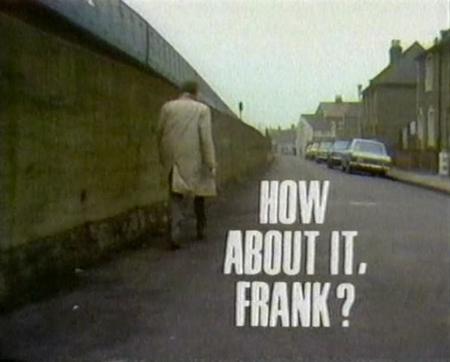 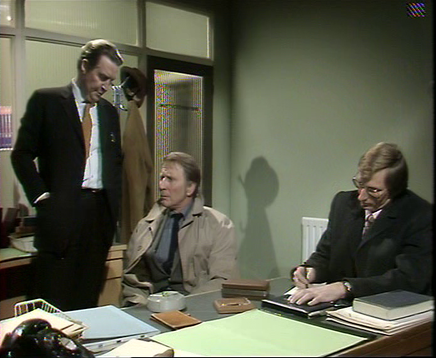 Unfortunately for Frank and Joe (maybe even for Tarrant) the police are less than impressed by their liaison and suspect skulduggery. The wrath of Tyson comes down on all of them but Marker particularly feels the heat. Tyson is aggressive and bullying but Frank shows his resilience. He refuses to make a statement because he cannot say for certain Tarrant assaulted him. He also suspects Tyson might do a deal with Tarrant that will leave him wide open. Ray McAnally's performance as Tyson is exceptional, the highlight of an excellent show. While Tyson is very unpleasant, even using his belligerence on his hapless assistant Kane, one suspects he is partly driven by his frustration at not being able to nail criminals. He underestimates Frank - and Ron Gash when Frank asks him for help. Gash's confrontation with Tyson is cracking viewing. Gash is very skilful, and injected with the right measure of amiability and steel by Peter Childs.

to be on the receiving end

seems to see Frank as part of the

problem, not as a victim. Sergeant 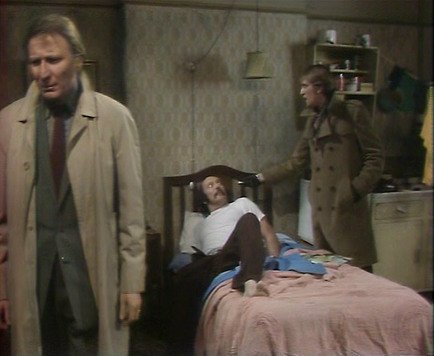 The final instalment of the trilogy matches its predecessors in its exceptional quality. It's still very serious but is a touch more upbeat as some scores are settled.

Ron Gash calls Frank with a job. It's a personnel check on a local computer expert called Brian Hart. Soon afterwards Frank receives a surprise call from Joe Martins, the man he saved from a robbery charge - and received a terrible beating for his efforts. Martins wants to get his fee for the horse-doping and says he'll help Frank get "compensation" from Tarrant. Frank would prefer to forget but plays along reluctantly.

He goes to a pub to watch over Brian Hart. Unfortunately his progress is impeded by an unwelcome visit from Chief Inspector Tyson and his assistant Kane. The intimidating Tyson is less than happy that Marker doesn't want to make a statement and promises to "make his life a misery" until he complies.

Yet again this is quite marvellous. There are three key plots here - the return of Martins and the pursuit of Tarrant, Tyson's persecution of Frank and the check on Brian Hart - all closely linked and working beautifully. Martins was a memorable figure and it is great to have him back. He and Frank find Tarrant and are able to get some return. Tarrant is a brilliant character, obnoxious but spitefully amusing. This time though he is on the defensive and it is good to see him on the receiving end. There is a very funny scene where Frank and Joe burst into his dingy bedsit and confront him. Exceptional performances from Alfred Burke, Stewart Bevan and, most notably, Robert Russell, make these parts such tremendous viewing.