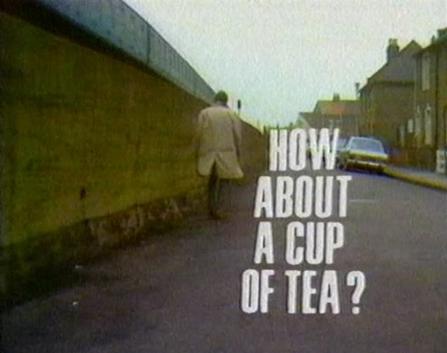 Utter brilliance. This is a real eye-opener. It is a great insight into depression and hopelessness, not just in terms of Frank. One can understand his despair after recent events. However he does very little to help himself. His determination for a fresh start is one many of us can empathise with. His visit to the job centre though is a crushing blow. It's only a short sequence but is one of the most memorable in the show's history. Frank, in a rare display of openness, outlines his frustrations. He says, "My job's collecting dirt - other people's. It rubs off and I don't like it." The clerk - a marvellous cameo by Confessions star Robin Askwith - is utterly unsupportive. "You're getting too old for most jobs." The exchange is quite funny in a dark way. The clerk describes Marker's work as, "Asking stupid questions and getting silly answers," to which Frank replies, "No.. that's your job."The visit to the hapless Mrs. Grant (a fine display by Rosalind Ayres) is also very chastening. She has been deserted by her faithless, work-shy husband, has a young baby, no money, no gas or electricity and no right to a home. She also refuses help. Frank gives her the good advice others are giving him but promptly reverts to self-pity when he leaves. This illustrates how people are often so adept at giving good advice to others but fail to follow it themselves. It is much easier to be wise when one has a sense of detachment.

The episode raises the question of how best to help unhappy, depressed people. Percy and Helen try to help Frank but there comes a time when they need to be blunt and challenge him on his negativity. Again there is a remarkable scene where Percy confronts Frank - tremendous acting by Ray Smith and Alfred Burke. Things do improve but sadly Percy later has to say he has to move on - he is being transferred to Reading. Ray Smith beautifully makes clear how painful this is for Percy - no need for words on his final shot. A sad loss to the programme.

The story also very capably shows how both parties to a dispute can be suffering. Mrs. Grant is in despair but on the other hand Mr. Phillips, the landlord, needs his house back desperately. His wife is about to give birth and she also is upset.

There is a great part for Richard Hurndall as a kindly priest who offers advice to Frank and Helen - she especially needing his advice. So different to his role as the strait-laced Sir John in The Golden Boy. While he largely offers platitudes he does so very benevolently. However ultimately the most significant part is for the splendid Peter Childs as Ron Gash. Ron is an ex-policeman turned private eye based in Walton-on-Thames, a friend of Percy. Ron is a very different, rather ebullient figure but he may be in a postion to help Frank.

Ron would reappear in the next episode, the final in this exceptional triology in which the events of the first story would finally be resolved... 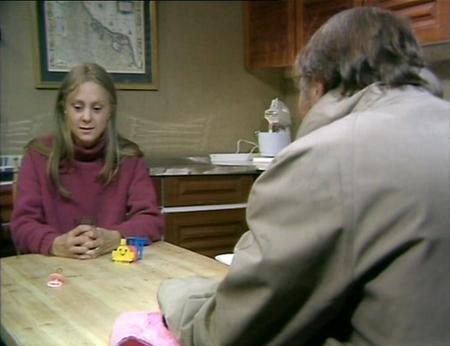 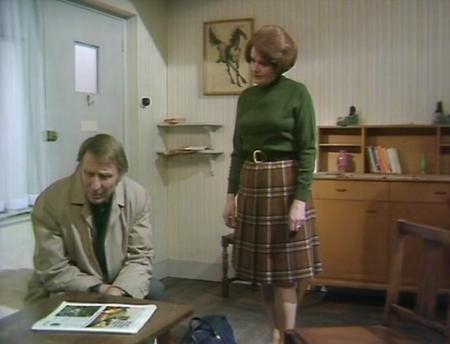 that Frank isn't the only one

trapped in misery and turning

No fall in quality after the exceptional opener. While that had an atmosphere of bile and brooding violence this is much more introspective, dominated by misery, self-pity and frustration.

Frank is about to be released from hospital. Physically he is better but psychologically he is in a terrible state - listless, depressed and negative. Percy tries to help by giving him a new case but he's not interested. Helen Mortimer visits from Brighton but she receives short shrift as well. Things don't improve when he goes home. He continues to reject Percy and Helen's support and says he's had enough.

He decides to get a new job and goes to the job centre. It is a dispiriting occasion as the clerk makes clear that he has no real prospects. He does decide to take the case Percy offered. It involves some tenants who are not paying rent and refusing to leave. His visit to one of the tenants, Mrs. Grant, proves to be a disturbing experience for all concerned.