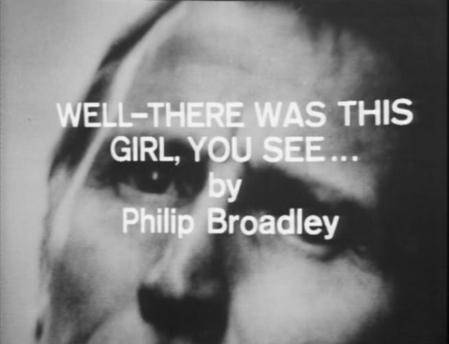 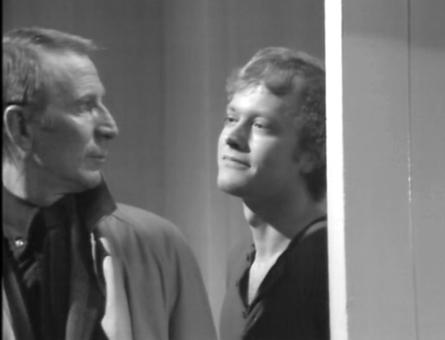 Frank is now ensconced in his new office at 93, Eton High Street. He is visited by Mary Freeman, a young woman, who says she knows the whereabouts of a stolen necklace and is willing to halve the reward money with him. She is doing this to get back at her former boyfriend, John Sheldon, whom she now hates. She is not willing to shop him directly because he scares her. It's a tempting offer but Frank has been stung before with retrieving stolen property and intends to tread very carefully.

The mysterious Mary Freeman (Susan Broderick) has an offer for Frank 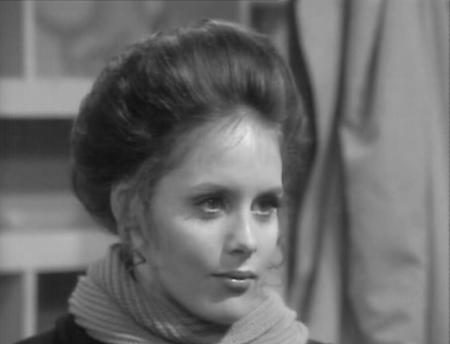 Mary Freeman (a skilful performance by Susan Brodrick) is also memorable. A very attractive young woman but extremely intense and never entirely trustworthy. She is certainly spiteful. Frank has very good reason to play safe with her.

Among the ancillary characters Mr.Quinton is another elderly solicitor who looks down his nose at Frank, accepting his help only very reluctantly. His scenes with Frank again contain some great authentic humour. James Walker is Sheldon's sidekick. a rather less assured personality and one who is rather more unnerved by Marker's intervention. Mr. Jones is an unfortunate former employee who evokes sympathy. He lost his job when the necklace was stolen from the shop where he and Sheldon worked but protests his innocence - with very good reason it seems. Impressive acting displays abound here.

Maybe one criticism concerns Frank searching the rooms of two suspects. While certainly plausible it does seem remarkably risky, particularly in one instance when the target is only on a visit to the bathroom. The chances of being caught must have  been great. Perhaps it is generally a departure from reality how Frank so rarely is caught by those he trails, although there is a notable example of him being exposed a few episodes later. However it could be argued that an experienced and successful operator like Frank would have learned how to avoid suspicion or being "caught in the act" and therefore such occurrences would be rare - though still very damaging. These scenes of furtive searching are though tense and effective on screen.

The tension between Frank and Percy certainly makes this very impressive. Nell Holdsworth has her first significant role, helping Frank develop a sketch of the stolen jewels and giving him some advice. There is a neat sting in the tail at the climax that rounds off a great story.

Right from the beginning Frank informs Percy Firbank of developments but neither really trust each other at this stage and Percy is aware of Frank's past. Percy goes to see Sheldon and finds him to be an extremely cool customer. Although he only rents a room he is arrogant, supercilious and condescending, fancying himself as an intellectual. Percy is infuriated as Sheldon toys with him, inviting him to search the room. Percy is not used to be being mocked like this, as he tells Frank when he returns.

Frank visits later and has no more success, but he does seem more able to rile Sheldon, although the latter gives nothing away. The job of recovering the necklace is going to prove difficult - and not just because of Sheldon.

A super story, written by the excellent Philip Broadley making his debut for the programme, even better than the series opener. It is well-written with very fine characters. Sheldon is a marvellous creation, one of many middle-class crooks or suspected crooks seen in the show. However this character is even sharper than normal. Much credit for this goes to Michael Pennington, an actor now very much associated with the theatre and Shakespeare. This theatrical style is ideal for an arrogant and over-weening figure like Sheldon. The scenes where he meets Percy and later Frank in his room are deliciously funny - natural, unforced humour coming from Sheldon's disdain for his accusers. Every scene involving Sheldon is great value.