Reggie Aston, an elderly former public schoolmaster, calls into Frank's office asking him to trace Vyvyan Reveldale, a fomer student. Vyvyan went up to Oxford but then left without warning and disappeared. Aston explains his fond relationship with Vyvyan, stressing there was nothing untoward, but mentions matters are complicated by the hostility of Vyvyan's father towards him.

Frank goes to see Vyvyan's father, Sir John, at his mansion. He is bemused to find Sir John not only unco-operative but seemingly unconcerned about the fate of his son. Sir John is angry when he discovers Aston's involvement. The next step for Frank is to go to Oxford in the hope of finding some answers. He embarks on a trail that uncovers some remarkable characters - and Vyvyan Reveldale...

One of the very best episodes and certainly the best of the "lighter" ones. It still has its darker and more reflective aspects, with the final part quite exceptional in this regard as Frank discusses with Vyvyan the physical and psychological journey he has been on. Most memorable is when Vyvyan quotes Schiller:

"Freedom is only in the kingdom of dreams."

Another beautiful expression is Frank recalling Vyvyan saying he had wanted to:

"Disappear without leaving a ripple on the surface of the pool."

However it is in its lighter style that this really excels. There are so many great characters. Aston bamboozles Frank with his Latin expressions and is a real eccentric. Sir John is the epitome of the "stiff upper lip" and is another wonderfully weird figure, albeit a rather less endearing one. It is clear that he regards Aston's interest in his son as homosexual but of course such a "gentleman" would never say so directly! Lady Reveldale is also a very strait-laced person who tries to make Frank's job very difficult before easing-up and helping him out.

There are three great cameo roles. On arriving at Oxford Marker meets a good-humoured former friend of Vyvyan who has a good-natured envy of the latter's effortless success. More impressive still is another friend, Millie Chandler, a dental hygienist who is enigmatic, authoritative but rather cold. Finally is a final contact, Carol, a rather seductive "hostess" who charms Frank, thinking him a client before offering some useful insights on Vyvyan. 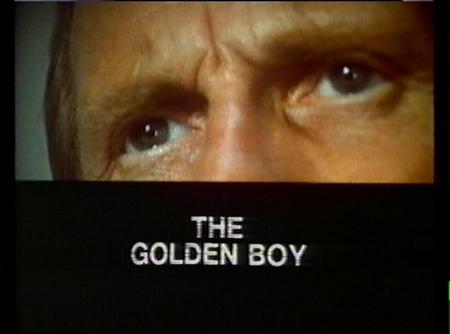 Plenty of insights over the breakfast

And then Vyvyan. Although he only appears in the final twenty minutes he makes a huge impression on the viewer. A splendidly engaging figure, on the surface very self-assured and hedonistic, frittering his talent away on indulgence. Under the surface however, as Frank discovers, he is rather more insecure and humble, a genuinely likeable and mature young man.

The performances are exceptional. Alan Webb (Aston) and Richard Hurndall (Sir John) are excellent. Carole Nimmons is very sharp as Millie and Linda Liles smoulders as Carol. It is though David Gwillim, who takes the honours with his stylish but dignified portrayal of Vyvyan. Needless to say Alfred Burke is faultless, with Marker at his most socially skilled and incisive.

All the best qualities of Public Eye are here - a must-see!