A notable face in this tale is Veronica Carlson as Knaggs's German girlfriend Ingrid Bord. The glamorous Ingrid, with her tan and long blonde hair seems a very likely partner for a gangster and Veronica plays the part well. Bates and Wilson make clear that she is out for herself and may bring his downfall. It's possible that there is some jealousy at work - there is some evidence of a deeper attachment to Knaggs on her part - but she is restless and clearly used to the good things in life. Her relationship with him could well be a risky one for both parties.

Only two parts don't quite come off, for quite similar reasons. Oliver Cotton's muscle-bound removals man has a little too much swagger. More disconcerting is Harry, Bates and Wilson's "heavy". Harry appears rather cliched - dark-glasses, leather jacket, maintaining a sinister silence apart from a few gruff words. Somehow he doesn't quite convince. All the same he plays a useful part in a powerful climax in which it seems clear that someone - possibly Frank - is going to suffer unless matters take an unexpected turn. Unquestionably a very strong start in a new neck of the woods for the show.

Frank a challenging case on his

The first Chertsey episode is the best - an extremely accomplished effort. Not only is it a fine story on its own terms but it provides, particularly in the first ten minutes or so, an excellent guide to the character of Marker and his work. In fact this would serve as a good introduction to the show for new viewers as he makes a new start and tries to establish himself against the odds.

The serious crime background makes this a very good companion piece for the opening episode of Series 7 - Nobody Wants To Know. Both in fact were written by James Doran and capture the ruthless world of organised villainy extremely well. Knaggs, Bates and Wilson are all deeply unpleasant characters who will happily cut each other to pieces when the going gets rough - along with any innocent who gets in the way. Knaggs is unquestionably a very threatening man but he is playing with fire. He is laundering money, some of which appears to be claimed by his erstwhile partners, and there seems little doubt that this money is the product of violent crime. He may be able to dish out violence but so can his enemies. Of course they too could find themselves on the receiving end if they are deemed to offend. A deeply unsavoury world that the writing and direction rightly make no attempt to glamorise.

Ray Lonnen gives a powerful performance as the intimidating Knaggs. The character can be compared with the thug Tarrant in Nobody Wants To Know. Both are fearsome and amoral but Tarrant has a certain redeeming charm. Knaggs is simply nasty and one does not doubt that Frank is at serious risk in his dealings with him. Bates and Wilson are little better and Keith Drinkel and George Sweeney do good jobs in these supporting parts.

Frank finds that even the police can be unsympathetic and immdediately runs into trouble with Chief Inspector Reeves. This was a typical theme throughout the show's history. Only in the case of Percy Firbank was he able to develop any significant and positive relationship with the police, and even that got off to a difficult start and continued to have its tensions. Among other things Reeves is not impressed to catch Frank in the act of deceiving someone over the phone in his quest for information. Marker is able to explain himself well and shows he knows his law, earning a certain grudging respect from the officer, but it's plain that there is considerable suspicion - on both sides. Maybe it could have been worse as at this stage Reeves doesn't seem to know about Frank's spell in prison.

Antony Brown gives a strong display with good interplay with Alfred Burke and it could have been useful to bring back his character later in the run. Other Chertsey officers do appear and none of them give Frank an easy ride. In a good example of continuity Reeves says that his Detective Sergeant Evans will be around to check up and indeed he does figure in the next episode - No Orchids For Marker.

Frank has one clear supporter in his early days and that is in the unlikely form of his new bank manager Pearce. Pearce is really doing his best to help, and not just in a financial sense. However, like many people before him, he finds that Frank doesn't really appreciate this support - certainly not if it impinges on his independence. Later he senses that his pressure on Frank to make more money may have backfired, encouraging him to unwisely take a dangerous case. He does his best to make amends but finds that his efforts don't have the desired effect. He does break through a little to the uptight Marker and a friendship of sorts might have developed. As with the instance of Reeves it could have been useful to bring back Pearce's character on occasion, and possibly if there had been another Chertsey series that would have happened.

Another genial character Frank meets is the station master Watson, although the bills he brings don't make for the happiest of meetings. Once again it might have been worthwhile bringing back Watson and it is possible that the producers were trying out him, Reeves and Pearce for future potential. A further series may have seen the return of any of these men, or perhaps some other figure would have become a familiar face to provide Marker with some sort of regular and fruitful contact. This had been an asset of the Brighton and Windsor years and would have been useful in this location.

Nowhere is Frank's financial predicament more clearly signalled than in this episode. Despite years of hard work he is virtually penniless and the prognosis looks even bleaker. The discussion with Pearce about charges reveals remarkable changes in prices compared to today. He was earning less than a pound an hour but felt unable to increase his charges because his clients would be priced out. Pearce outlines the "brave new world", describing how the bank had used an enquiry agent who charged £2.50 a day - almost three times the Marker rate. Frank feels this is extortionate but his biggest worry is survival. In particular as a newcomer he feels in no position to start upping his fees. Unfortunately - as even Pearce laments - such an approach makes him a dubious risk for the bank. It is those clients who are milking their customers - or filling their ample accounts illegally like Knaggs - who attract the banks' support. If anything the financial odds would be stacked even more against the likes of Marker now.

The discussion with Pearce is also a fascinating insight into Marker's world and mind. This is a man who prides himself on his independence and self-reliance. However that can count against him, financially at least. No doubt he could have stayed with Ron Gash in Walton and made a better income but that would not have satisfied his desire to be his own boss. A certain defeatism is evident in the exchange - he is only too willing to see rejection even when Pearce is trying to help. This negativity had really kicked in after the traumatic events of the first episode and it is quite possible that had he evaded trouble he could have made a much steadier living in Windsor. That was not to be and had the show continued there might have been other moves in the search for the right place. 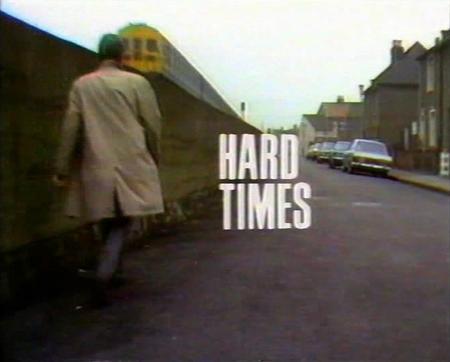 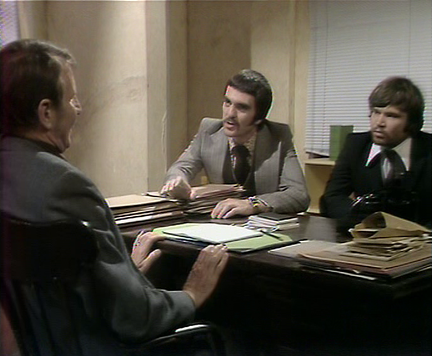 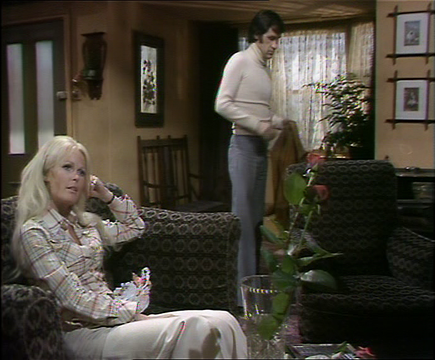 Frank moves into his new office in Chertsey, vacated by Apollo Aerials. It's not a happy start. He finds himself stung by very high removal charges and unexpected bills.He needs a loan so goes to see his new bank manager, Mr. Pearce. Pearce is intrigued by Frank's work and aims to be very friendly and accommodating, but he is perplexed by the Marker finances. In particular he believes that Frank is charging far too little for his services and is therefore bound to run into financial strife. Frank baulks at the suggested hikes which Pearce says are necessary before he will lend a significant sum. Eventually they settle for a small increase in charges to £1.25 an hour (ten pounds a day) in return for a fifty pounds loan.

Frank gets back to the office and finds two prospective clients, Bates and Wilson. That should be good news but there is something about this pair that strikes the wrong note. They are sharply-dressed, somewhat aggressive young men who say they want a former "business partner" Jimmy Knaggs traced. They only want an address, not the legal process of serving a writ, and Marker makes clear that he suspects something untoward. They rather unconvincingly deny this but in any event he is not in a position to turn down work.

He goes to a local pub where Knaggs has been sighted. The barman gives a clear enough indication that Knaggs is around and is a less than likeable character. Frank quickly spots the man accompanied by a very attractive girlfriend. He follows him but Knaggs is alive to trouble and senses what is going on. He sends his girlfriend ahead, waits around a corner for Marker to catch up and then confronts him before delivering a beating.

Bates gets to hear about this and angrily visits the office to demand his money back. Frank tells him that he doesn't have the money anymore but he will carry on and find Knaggs - he has no choice. Bates does not seem like the sort of man to tolerate failure. Unfortunately Knaggs has also made clear that if Frank trails him again he will kill him. Perhaps this is a case too far for Marker...