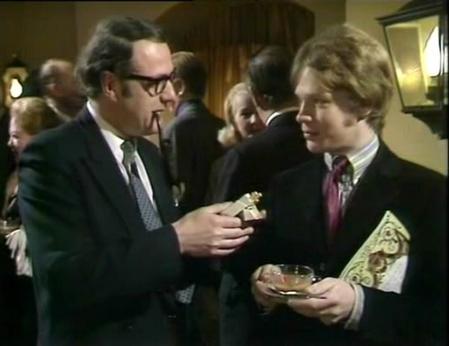 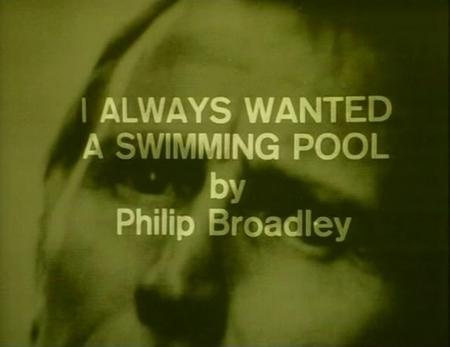 In a parallel enquiry Mrs. Willet has asked Marker to observe her husband whom she suspects of some impropriety. Frank sees him selling encyclopaedias and can certainly find nothing untoward but Mrs. Willet seems unconvinced. Eventually she drops the case but later on re-engages him - this time maybe with good reason.

This was the first ever episode broadcast in colour. It wasn't technically the first recorded in colour as A Fixed Address in 1969 was produced in that format for test purposes though only ever broadcast in monochrome. It is still immensely impressive and embodies so many of the best qualities of the show. It's the first of the series to have a lighter theme and is engaging throughout. At the end, neither of the plots has a definitive answer, although most viewers will lean towards particular conclusions.

Yet again there are memorable characters. Charles Luce, very warmly portrayed by Cyril Luckham, is one of the most amiable and appealing figures seen in the show. It does seem extraordinary that he could be supporting forgery but appearances can be deceptive. Alan Grove, the modern artist, is thankfully not depicted as a stereotypically bizarre and over-worldly personality but as rather down-to-earth, albeit still with an unconventional and steely edge. He is irritable and quite intense, somewhat rude towards both Luce and Marker - or should that be "John Harrison". He quite perceptively senses something odd about "Harrison". The scenes with Harrison have a nice, sharp humour about them. When Charles gently complains about him spending money on a prostitute he replies memorably, "I haven't got time for conventional seduction." The casting of James Bolam was ideal for such a "rough diamond". Possibly the most striking part is that of Mrs. Willet, sharply performed by Avril Elgar, probably best known as Mildred's wealthy and snobbish sister in George and Mildred. Mrs. Willet is very suspicious, almost neurotic, and Frank has to deal with many such individuals. Her husband Harold (Anthony Dawes) seems to be the victim of unnecessary surveillance. Indeed Frank, displaying his trademark honesty, tells her he thinks there is no cause for concern and she is wasting her money but she insists on him continuing. However a meeting with a young man called Peter suggests he may have something to hide. Leon Vitali's small role as Peter is very striking and amusing. Leon briefly took over the part of Craven in The Fenn Street Gang.

A Swedish art buyer, Sven Gustafsson, asks Frank to investigate local art dealer Charles Luce. He believes that Luce is peddling fakes of works by Francis Manton, a member of the Norwich School. However Luce is very cagey and Sven needs proof. Frank has to pose as a prospective buyer and aficianado of Manton in order to get through to Luce, adopting the pseudonym of "John Harrison". He tells Nell about Luce but she refuses to believe he would be involved in anything illegal. She also is less than happy at Frank's subterfuge. It will not be easy as Luce has an unconventional sales policy, not previously selling to English buyers.

Luce has a protegy, a young artist called Alan Grove who paints in a modern style. Frank sees his work when he visits and is not particularly impressed, although Luce is keen to promote him. However is it possible that Grove has a more traditional, lucrative but illegal sideline? 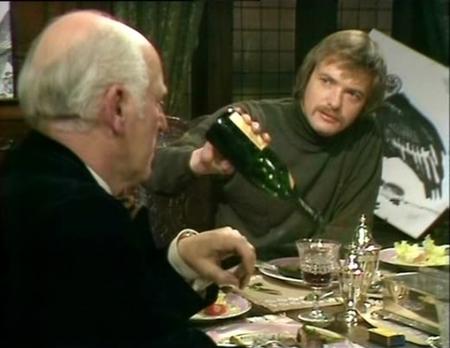 The one part that risks slipping into parody is that of John Savident as Sven Gustafsson. Gustafsson is very much larger-than-life, a partly comic figure, broadly played by the actor who later starred as Fred Elliott in Coronation Street. One can see where the comic ability of the later character comes from but this role just about stays the right side of the line.

The final scenes are marvellous, quite remarkable and very satisfying - except maybe for Mrs. Willet! In addition, good to see a more significant and slightly more spiky role for Brenda Cavendish as Nell. There is even some unintentional comedy as the debbish Nell tells a customer, "Give my regards to Marie-Claire, and tell her I will be wearing my hot-pants on Saturday"! As one observer noted, a line that could have come straight from Acorn Antiques rather than Manor Antiques! Altogether a smashing story, yet another great effort from Philip Broadley.