A rare taste of luxury for Frank 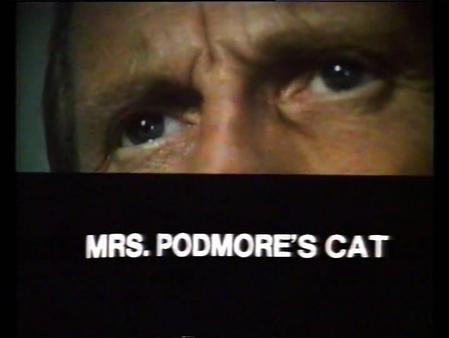 Mrs. Diana Podmore, an extremely wealthy widow, has a reputation as a man-eater, particularly of young men. She comes to Frank with a proposition but it is not of a romantic kind. She asks him to look after Bertie - her cat - while she is away at a health farm. It's an assignment that Frank finds amazing but is happy to accept. He will be paid fifty pounds for one week's "work" and have the run of the house. Bertie has every luxury, like his mistress, even to the extent of using a litter tray in the bathroom.

Frank settles in and enjoys the luxuries on offer, the only problem being Bertie's reluctance to eat the expensive fare provided for him. However there is a surprise visitor. A man called Major Thursby-Byers is found in the house. He says he is a friend of Mrs. Podmore and she left him a key. He had simply returned to collect some shirts. However matters take a more serious turn when Frank discovers that two valuable miniature paintings have gone missing. The Major seems an obvious suspect, especially when it transpires he has just had a spell in prison for fraud. Is he the culprit? Or might it be Mrs. Podmore's young lover Ronnie who lives in a bedsit with his girlfriend? 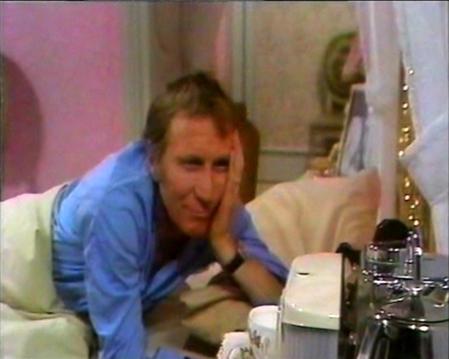 On original broadcast this was sandwiched between two of the very finest outings - Many a Slip and The Man Who Said Sorry. It is certainly not up to those standards but is impressive nonetheless. It is a very fine and entertaining story, squarely in the lighter tradition of the show. Maybe then it is unsurprising that the writer is Philip Broadley who contributed so many great scripts in this style for the programme. Once again he achieves a winning effort. There are some similarities with his debut script a year earlier - Well - There Was This Girl, You See. In both we have a middle class, somewhat pretentious man who comes under suspicion for theft of valuable articles. Both men have a very confident, somewhat audacious approach when they meet Percy and he asks to search their rooms. However Thursby-Byers is a far more dignified and likeable figure than the acidic Sheldon. The "Major" - it is never really clear whether he genuinely achieved this rank - adopts a very civil and warm approach throughout but just like Sheldon he still has the ability to antagonise. The scenes when Percy quizzes these men are funny while retaining their serious foundation. A key difference though is that the Major is a convicted criminal and suspicion weighs much more heavily upon him. This difficulty faced by ex-prisoners - not least of all Frank himself - was a running theme in all the Thames series.The Major is a splendid, amusing character, and one could understand him having charmed and deceived Mrs. Podmore in the past. It is utterly in keeping with his style that he claims to Frank that he was in the Canary Islands for nine months when he was really in prison! Dudley Foster gives an excellent performance. He was a very fine comic actor and doesn't put a foot wrong. He had also co-starred with Alfred Burke when Alfred made one of his rare excursions outside Public Eye in an episode of Randall and Hopkirk (Deceased) back in 1969 - they played two brothers involved in deception. Sadly Dudley took his own life only a month after this episode aired but this was a fine way for him to sign off on screen.

approach to being questioned 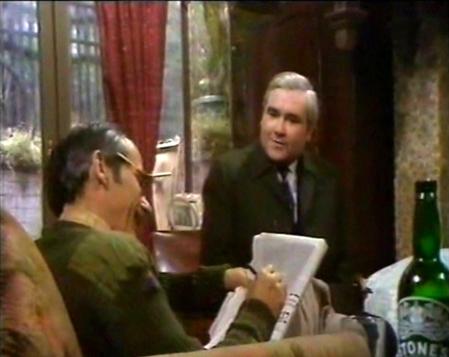 Jean Kent smoulders as the seductive Mrs. Podmore. A very accomplished actress, like Dudley she fills her role perfectly. Maybe if Frank had been younger he might have been in her romantic sights but she still flirts with him a little. Her eccentricity also manifests itself in her indulgence of her cat, Bertie. Even when she hears of the thefts she is not ruffled. However her good spirits are broken when the Major oversteps the mark when talking about her new young man Ronnie. She snaps and angrily tells him to get out. It is testimony to Jean's skills that she delivers this outburst so well in counterpoint to the character's otherwise positive mood.

There is a very welcome reappearance for Brenda Cavendish as Nell Holdsworth. Nell had been a regular in the fifth series but this was her only episode thereafter. A common problem in TV series is the way regular characters just disappear, never to be seen again, but Public Eye did see brief returns for characters such as Mrs. Mortimer and Ron Gash and very welcome they were too. Nell is just right for this story given that it centres on theft of paintings bought from her shop. She has some nice banter with Frank, with just the slightest hint of flirtation. However there is still a formality between the pair with her calling him "Mister Marker" and he referring to her by title as well. Although Nell was never as strong a character as Percy Firbank, Helen Mortimer or Ron Gash it would still have been useful to have brought her back for another episode or two later.

The relationship between Ronnie and Mrs. Podmore is an intriguing one. She seems to regard him as her plaything. It's not exactly clear what his motive is for being with her. There is an interesting shot when they kiss and he is clearly looking around her room - whether he is eyeing up her possessions, just looking at a clock or is simply bored is uncertain. What does seem clear is that he doesn't really feel attraction and is probably motivated in some way by money, although whether that means he is prepared to steal from her is another matter. His girlfriend Beryl knows that he and Mrs. Podmore have had a previous relationship so she is not best pleased to discover from the Major that it is still going on. Beryl has some nice lines and is an appropriately acerbic character. The humble bedsit that she and Ronnie share is a stark contrast to the opulent flat of Mrs. Podmore, while her sharp tongue is very different to the urbane language of the Major. Tommy Boyle very much impresses as Ronnie with Cheryl Hall in good form as Beryl.

At the end there are still some mysteries for the viewer to reflect upon, and that is no bad thing. Even the presence of Bertie is an added attraction for cat fans like this viewer. Altogether a very engaging effort but Philip Broadley's next script - The Golden Boy - was even better and one of the ultimate Public Eye offerings.

PS
According to Philip Broadley's rehearsal script the episode was produced between 10th-23rd October 1972. The broadcast episode has a few minor differences in dialogue from the script which also details that Ronnie is a swimming instructor - not mentioned on screen.