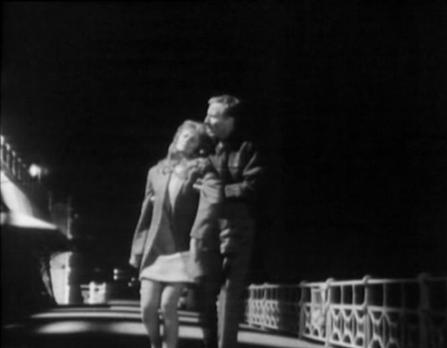 Late in the episode we see a different dimension to the story with the appearance of Doctor and Mrs. Nourse, with whom Shirley used to work. Dr. Nourse certainly does not have a sympathetic bedroom manner. His ideas on suicide attempts are worthy of attention but callously expressed, infuriating Frank. Mrs. Nourse is rather more concerned but clearly no competition for her husband. 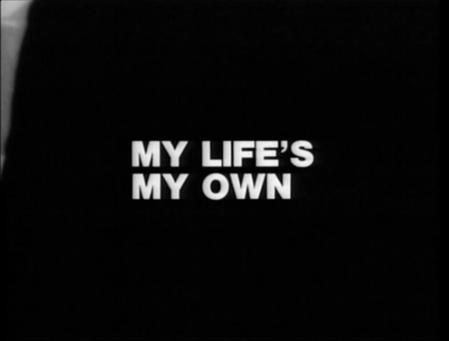 Early on the only other character is Jim Hull, who has one of his regular interviews with Marker. Hull discusses new work with him, and is less than receptive to his wish to return to solo enquiry work, telling him he needs to work with someone with "more business sense". He also tells Frank he will need to find new digs as Mrs. Mortimer will need his room for guests during the summer (something she later contradicts). All this does not go down well with Frank, who already resented Hull's advice, and is itching to get out of the interview.

Alfred Burke is in excellent form as usual, and John Grieve and Pauline Delany, are their accomplished selves. Katharine Blake is impressive as Mrs. Nourse. However Stephanie Beacham deserves particular credit for her role as Shirley. At this time she was a standard guest star and perhaps too easily seen as little more than "eye-candy" but here shows she could give a strong display in a demanding role. Her dazed state as she and Marker memorably walk along the seafront as he tries to keep her awake is very well portrayed. She helps to make the confused and vulnerable Shirley such a potent figure. In one excellent line she tells Frank, "We could have a party and invite all our friends. There'd still be only the two of us," really bringing home the solitary nature of the pair.

Overall one of the best episodes of the Brighton run. Perhaps this was due to the pairing of Roger Marshall and Kim Mills, the two biggest influences on the show as writer and director respectively. They would work together only once more on a story. From the next instalment Marker would be back in the world of work, but there would still be challenges ahead...

PS
Tracks by the Tremeloes ("Hello World") and the Fifth Dimension ("Up, Up And Away") can be heard playing on Shirley's radio.
Wednesday's Child, written and directed by the same team and broadcast in 1970, acts as a prequel this episode as it shows Shirley's life with the Nourses. Gary Watson and Katharine Blake reprised their parts here although Prunella Ransome inherited the role of Shirley. There was no part for Alfred Burke but the play is still of great interest to followers of Public Eye.

A young woman called Shirley turns up on the doorstep asking for a room. Mrs. Mortimer is away so Frank answers. He is reluctant to make a decision while she is absent but agrees. Shirley says little, preferring to play her radio, but does seem anxious. She keeps trying to call someone called Chris, but without success.

That evening Frank is getting ready for bed. Shirley's radio is still playing loudly so he bangs on the wall to get her to turn it down. He is worried when he gets no response. He breaks down the door to find her apparently asleep. He then notices by her bedside an empty glass in which pills have been dissolved - she is actually unconscious after taking an overdose. He does all he can to revive her, with eventual success. However that is not the end of Shirley's problems...

A fine story, with a sharp twist. One of the remarkable things is that for almost all the first two parts this is a two-hander between Frank and Shirley (Stephanie Beacham). This anticipates the even greater innovation of The Man Who Said Sorry three years later, although it cannot match that brilliant episode's quality. We see Frank at his resourceful best here, his self-reliance as he saves Shirley's life. However, as Mrs. Mortimer observes when she returns in the third part, he may have bitten off more than he could chew and have been better advised to call for medical help. 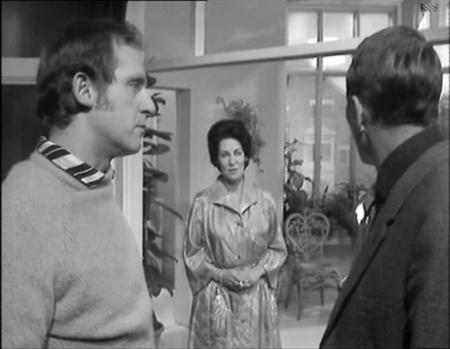