Frank follows Eddie on a trip to Northampton. While there he does indeed see Eddie with a young woman whom he kisses when he meets her. Later he checks into the same guest house as Eddie and finds another Mrs. Meadows who describes her relationship with Eddie which is remarkably like that of Julia. Then Eddie goes away again, this time to Cheltenham. Is the mild-mannered, affable Eddie a serial philanderer or even a bigamist? Or is there a more innocent explanation?

A solid if rather low-key outing. It's quite an engaging story without ever raising the roof and one of those rare ones where there isn't a single dislikeable figure. There is no doubting that Eddie is a very pleasant man, who cares for those around him and treats them well - but what exactly is he doing? Peter Sallis suits well the role of Eddie, just prior to his debut in Last Of the Summer Wine.

Marjie Lawrence, making the second of her four guest appearances in the programme, is good as Eddie's wife, another very likeable figure, albeit rather unconfident. Frank knows how attached she is to Eddie and tries not to worry her. However this raises some serious issues at the close of the story. Frank's level of disclosure of what he has discovered is very limited and one doubts whether he would really have been so reticent. Granted he does not want to unduly upset people, but surely there are some things a person has to know? The truth can be very hurtful, which is no doubt Frank's fear, but he may just be setting Julia up for more anxiety.

The other women in Eddie's life are engaging personalities. Frank uses his inquisitive skill to probe their relationship with Eddie. This story also has a small part for Gareth Thomas as a garage attendant from whom Marker rents a vehicle. Gareth returned in a much more substantial role at the start of the sixth series the following year in The Bankrupt. Colin Baker also briefly appears as a rather bemused clerk from whom Frank checks the marriage records.

One of the virtues of this story is it allows us to see Frank travelling around - something that was pretty rare in a video-taped production. Another sign of changing times is Frank remarking that children born outside marriage are "bastards" - such a stigma has largely disppeared today. It is testament to the strength of this particular series that this should be one of the least impressive instalments. It is still good value, and on a par with quite a number from the final two series.

Just what is Eddie (Peter Sallis) up to?

Another appearance for Margie Lawrence, this time as Julia

Julia, a young wife, sees Frank because she is concerned about her middle-aged husband Eddie. Eddie is a likeable man, supports her and the family well and regularly tells her he loves her. However she is worried after finding a photo of a young woman in his jacket. Eddie goes away for most of the week with his job and she is worried he might be having an affair. 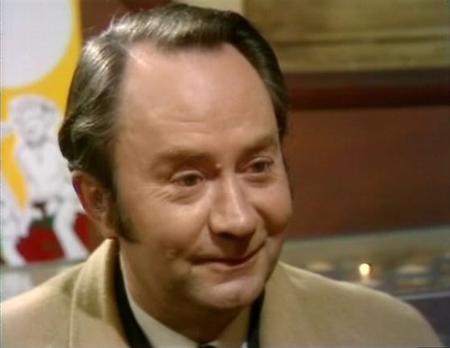 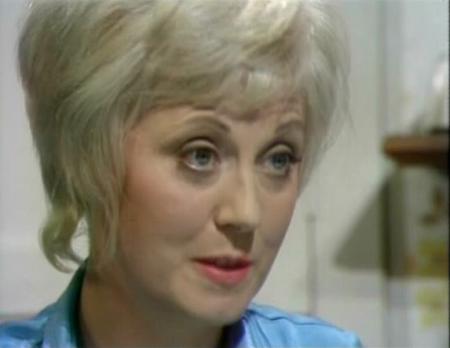 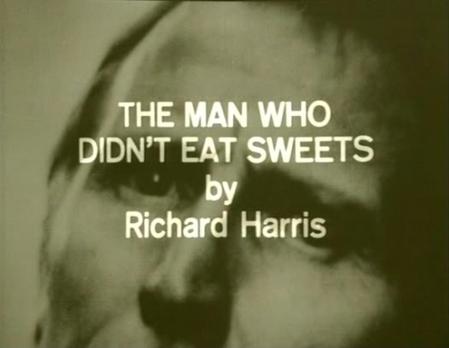