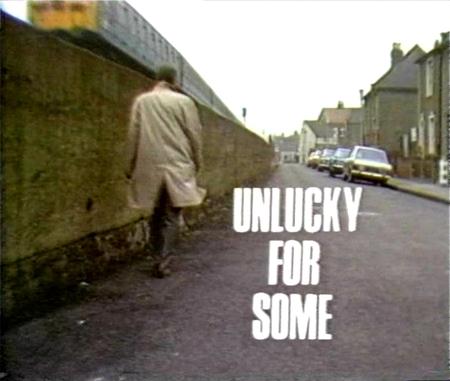 The curtain finally comes down on Public Eye after ten years. It's not a vintage outing but is still a fairly capable finale, and features a very fitting climax.

A middle-aged woman, Joyce, calls on Frank for help. She is concerned about her daughter-in-law Paula whom she does not like and suspects of taking advantage of her son Keith. Keith is oblivious to any problems. The family run a hotel and Paula has been spending a lot of time with a new resident, Fallows. Frank checks in to watch her and Fallows. He does indeed find that something is going on between them - but it isn't adultery.

He needs to find out more about Paula, whose background is something of a mystery. He visits a local art dealer who does know her and reveals that her first husband died in a boating accident a few years ago, after which Paula left her old friends. Frank investigates further and finds that there are some serious question marks over the events leading to her original husband's death. Are there good reasons for concern? 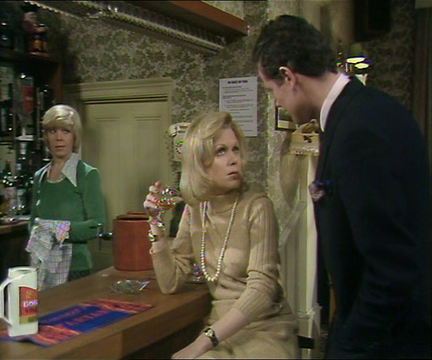 Among the cast two notable figures are John Quayle as Keith and Gwyneth Powell as Clare, the hotel receptionist. Quayle specilised in urbane, gentlemanly parts with a hint of naievity, usually in sit-coms, including a very memorable appearance as a new husband in the "Pink Carnations" instalment of Rising Damp. Viewers who grew up in the 1980's will remember Gwyneth as Mrs. McCluskey, the headteacher in Grange Hill. Jennifer Daniel is notable as Keith's deceptive wife. This was her second Public Eye appearance, having featured in A Mug Named Frank four years earlier. Julian Fellowes stars as the equally untrustworthy Fallows.

For the second time in a handful of episodes (indeed since the last Philip Broadley story) Frank senses a reward and comes in contact with an official who plays hard to get, in this case insurance agent Mr. Boland. These are good scenes - especially enjoyable to see Frank in upbeat style - but maybe suggest a little too much repetition. One element of the plot bears passing resemblance to the opening story of Thriller "Lady Killer", although without the greater drama one would expect from that fine show. Despite these small reservations it's quite a solid episode particularly after three indifferent predecessors.

Marker is typically incisive in this final outing. Fallows and Paula are both keen on boating so he looks up the subject and seamlessly gains their confidence. His skill not only uncovers the answer but points him towards a rare reward.

Paula certainly attracts suspicion. She seems permanently irritable. Her amiable husband comes across as rather naive and put-upon. His mother is quite the opposite - a strong performance by Joyce Heron - and is determined to protect him from what she sees as a deceptive daughter-in-law. Fallows, neatly portrayed by Julian Holloway, is amiable enough but definitely appears to be hiding something behind his smooth exterior. 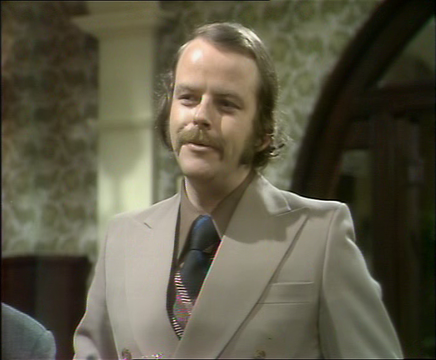 oblivious to his wife Paula's

looks on in concern

Why is Fallows (Julian