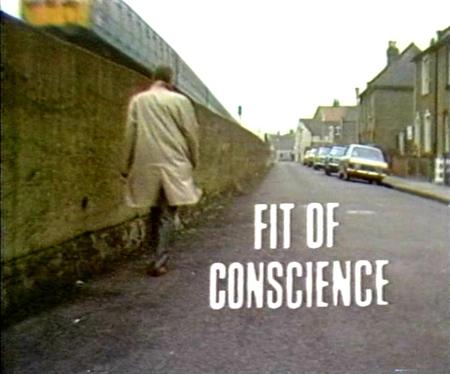 The two central characters of John Friendly and George Berry provide a striking contrast. Friendly is very much a martyr - or at least that is the impression he wishes to give. He appears to be noble and principled but there are real doubts about whether he is prepared to follow through his revelations and implicate himself and Berry. He describes himself as a religious man, and his wife even talks of him claiming to have had a vision of his son in a dream. Frank finds Friendly's rambling and philosophising a little frustrating and confusing. By contrast Berry is a fairly amoral and unprincipled man who feels no guilt - and seems to have done very well for himself. Evelyn's direct personality is far more in tune with that of Berry and one can understand why the two were once lovers. Paul Kermack, Griffith Jones and Margaret Whiting, making her third and final guest appearance, all give good accounts.Berry gives an interesting justification for his actions. He talks acidly about the poor pay of council workers like himself and sees the resort to bribes as almost inevitable. Corruption can have its roots when people do not feel valued or properly rewarded. However Frank, like most viewers, finds this attitude pretty unattractive and the results can be very unjust.

An intriguing character briefly seen is Bromley. His shabby, rather slippery manner makes him very much like the "snouts" seen in police series like The Sweeney. One can imagine that Frank would occasionally need the service of such people and it's maybe surprising they were so rarely seen on-screen. Bromley is an interesting figure, well played by Robert Gillespie, and if the show had continued it might have been useful to have brought him back occasionally.

Another notable scene is when Frank visits the estate agent. He uses great skill to unearth revelations about Brightwell Construction, under the pretext of searching for a property for his cousin returning from Canada. The agent is clearly uncomfortable and Frank looks very smug with his performance. This seems slightly out of character and not necessarily a wise option, as smugness may have given the impression that he had ulterior motives for his enquiries and made the agent suspicious and unresponsive. It is good to see Frank in positive mood but he would be aware that there is a time and a place for making this public. Maybe a writer and director more experienced with the programme would have been more subtle.

The enquiry scenes are pretty hard work for the viewer. A myriad of characters briefly appear and make little impression. It is notable to see a female engineering expert, played by Patricia Garwood, who provides some key evidence. At the time this was a rare role for a woman in a role commonly seen as male.

The ending is a very effective one. Once again the viewer can muse on Frank's reaction to the events. However, overall, it is hard to watch this without feeling that the show was somewhat tired and struggling a little for inspiration. And yet for all that there is still much to appreciate, and very few shows can say that of their weaker outings.

PS
With sixteen characters (including Marker) this has one of the largest casts of any episode. 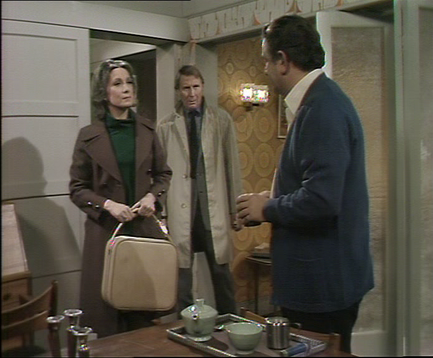 A tower block collapses due to structural problems, killing four people and injuring many others. Afterwards both the architect and the builder come under scrutiny but both are determined to defend their efforts which are now the subject of a public enquiry. Clerk John Friendly though thinks he has the answers. He goes to see Frank and explains that he and a man called George Berry accepted bribes from builder Arthur Brightwell, giving him inside information to help him win the tender. Friendly is convinced that as a result Brightwell's tender was excessively low, resulting in an unsafe buildling. The problem is that George Berry took early retirement and his whereabouts are unknown. The only lead is where his bank account is paid. He asks Frank to find him and then he will take over, hoping to persuade him to confess at the enquiry. Frank is surprised that someone wants his services to effectively implicate himself but agrees nonetheless.

Frank has a contact within the financial industry - Bromley - whom he asks for Berry's address. Bromley is anxious about giving the information as he feels he could be exposed as the source of the leak and lose his job. Extra payment overcomes his reservations. Berry is tracked down to a very smart flat in Surbiton which it transpires is paid for by a company owned by Brightwell Construction. Friendly goes and tries to persuade him to come forward but the latter is completely unrepentant and unwilling to help. Friendly is determined to change his mind, otherwise he feels Brightwell will escape justice.

Another rather underwhelming episode as the final series drew to a close. The opening scenes are probably the most dramatic in the show as the tower block collapses but they are not a sign of great drama to come. Once again there are a lot of intriguing issues and interesting elements but the results on screen pale by comparison to the show's normally exceptional standards. The backdrop of a public enquiry and building standards is hardly designed to capture the imagination but the programme had a remarkable talent for making great television out of ostensibly mundane material. On this occasion it doesn't really succeed.Conscience and guilt are at the centre of the whole story. Friendly is a complex, troubled man. He has committed an offence and seems to have taken guilt for the disaster upon himself. However he seems to be half-hearted in his efforts to own up, maybe hoping that somehow he will not have to make his corruption public. Frank finds him puzzling, maybe even exasperating - as does his wife, Evelyn. She does not want him to come forward but matters are complicated by her past affair with Berry. He believes she still has feelings for him and is trying to protect him but she insists she is trying to protect all of them.

There are echoes of The Beater and the Game here, and not just in the welcome reappearance of Margaret Whiting as Evelyn. In both episodes she plays a wife at odds with her husband, although the marital tension is nowhere near as bitter as in the earlier story. In contrast to the earlier tale it is her infidelity that is a source of conflict. In both episodes the couples have lost their sons in car accidents and these terrible events have persuaded the man to act corruptly. However the sheer personal drama is lacking this time. Although the similar story elements may be pure coincidence it is possible they were suggested by story editor Michael Chapman who wrote the earlier episode. This was David Ambrose's only script and he may have had assistance from Chapman. It is notable that the two scripts by new writers in this series (Lifer is the other) are less than impressive and this may have led to the editor's intervention. 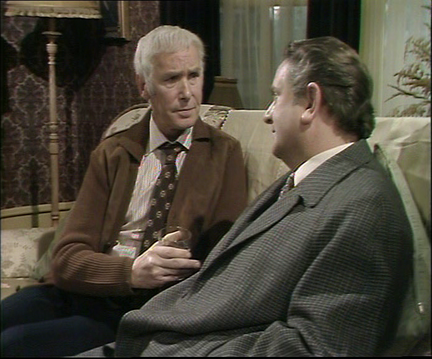