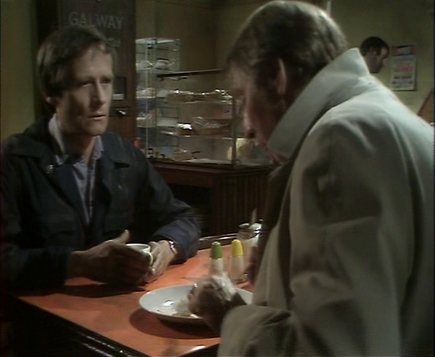 The young woman later bursts into Frank's office and angrily accuses him of harassing Stafford. It transpires that Stafford has left his job and may leave town. He is a prisoner convicted of manslaughter who has been released on licence and she is his case worker - Miss Price. When Frank reveals his half of the story the pieces fall into place. Biddle is interested in Stafford not with respect to his wife, who left years ago, but his late daughter Sandra who was killed by him fifteen years earlier. It seems that Biddle is out for revenge and Frank has given him the trail he needed. Will it be possible to avert serious trouble and make amends?

Probably no episode of Public Eye dealt with such sensitive subject matter.  The story is presented with great thoughtfulness and care but unfortunately the results on screen are extremely intense and make for difficult and rather unsatisfying viewing. This is not to say that TV should always be "easy" viewing or should shirk difficult subjects. Public Eye in particular had a tradition of exploring the darker side of life and was not afraid to present a bleak picture. However this episode just seems too dark, too depressing and is let down by some limitations in the casting and writing.

The sense of balance and senstivity of the story certainly deserves commendation. Stafford has committed a terrible crime, an offence for which many people then and now would believe deserves the severest penalty - at the least life imprisonment without parole, and maybe even execution. Mr. Biddle has had to live with his loss for fifteen years  and the pain will be with him for the rest of his life. Maybe the title is a suggestion that both he and Stafford are in effect "lifers". It is evident that he has been deeply traumatised by events. One can completely understand his devastation and desire for revenge. However Stafford is also a wrecked man. Whatever he was like before the killing he is now a pathetic individual. He never smiles and seems completely alone. Unlike many criminals he makes no attempt to justify what he did or proclaim his innocence. He accepts his guilt and completely understands Biddle's feelings. It is hard to see the released Stafford as any sort of threat to the public and he seems far more likely to become a victim himself.

Stafford is a man cut off from society, who seems reluctant to accept help. There are echoes here of Frank's behaviour six years earlier, although Frank was more able to fend for himself and more abrasive in his tone. Miss Price finds similar problems in getting through to her client as Mr. Hull did with Frank. Frank eventually emerged from this isolated stage but the outlook for Stafford looks far less promising. With a far more serious criminal record and much more withdrawn personality, the prospects are not good at all. Tony Calvin gives an impressive display as this very damaged man.

Arthur Biddle cannot escape the pain of his daughter's loss. He has kept her room exactly as it was before her death, plays music of the time and still irons lovingly her clothes. There is a very poignant scene - quite painful to watch - where he removes her dress from the ironing board and pretends to dance with it for a few seconds. His expression is at first enamoured before collapsing into tears. One cannot help feeling that surrounding himself with so many reminders only serves to bring back the pain. This is a common dilemma of those who are bereaved or have suffered serious loss. They rightly do not want to forget but it is very easy to become trapped by memories.

There is no doubt that, when Frank encounters him, Biddle is a disturbed man. Maybe while Stafford was still imprisoned he could maintain some sense of normality but now his feelings take over completely. Again this is a common problem of victims of crime, whose fears and anxieties become amplified when their attacker is released - even more so if they return to live in the area as Stafford has done. Is Biddle dangerous though? That is the hardest thing to tell. It is one thing to make threats, another to do something about them. Frank though does not want to take chances.

Not for the first time Frank has found that a client has used him for dubious purposes. A useful comparison is with The Beater and the Game from 1971. In both episodes he successfully tracks down someone for a rather evasive client, creating a dangerous situation. Possibly, as he accepts himself when berated by Miss Price, he should have seen trouble brewing but that is easier said than done. Frank knows he could be implicated by the police if Biddle does take revenge. When he goes back to see Biddle he is absolutely furious - close to the angriest we have seen of him in the show. Biddle though is completely unapologetic. However when Frank reports his concerns to Chief Inspector Davis they are dismissed, with the officer seeming to gloat at his predicament. This suspicious, sometimes even contemptuous attitude of the police, was a habitual problem for him.

Why then, given so many fascinating aspects, does this outing disappoint? Quite part from the intensity identified above, there are problems with casting. Norman Bird seems the wrong choice for Biddle. Norman was a very capable comedy actor. He gives a good performance, and handles some dramatic scenes well, but doesn't seem right for such a serious role. Possibly the thinking was that, given the eccentricity of Biddle's personality, a comic actor may be suitable but overall the effect is unhelpful. A good example is one scene where Biddle holds up a photo of his daughter as a young child and mimics her saying "Daddy". This comes across as embarrassing rather than poignant.

The characters on show are either thoroughly miserable, like Biddle and Stafford, or dislikeable. There are two prime examples. The Inspector is a snide individual who seems unwilling to help. The cafe waitress is remarkably rude, ignoring customers in favour of talking to her friend, and makes very little attempt to be polite. Stafford's landlady Mrs. Lisle is a rather histrionic figure although she does have some neat turns of phrase. Arthur's fellow chef is another lugubrious figure who in common with almost everyone else does not smile at all.  Miss Price is more developed and quite well performed by Ingrid Hafner but again is a rather acerbic personality. Of course such individuals are common and quite realistic given the story but the sense of misery becomes too overwhelming.

The final stages, which again are worth comparing to The Beater and the Game, are well enough done and bring an appropriate climax to a difficult tale. This was the only script by Bob Baker and Dave Martin and it is notable that it works far less effectively than those by the regular writers such as Philip Broadley and Roger Marshall. In earlier series writers such as Trevor Preston, Ray Jenkins, Douglas Livingstone and Robert Muller had contributed superb scripts but this was not repeated in the final set, as David Ambrose's moderate effort for Fit of Conscience also demonstrates. Perhaps the script editor Michael Chapman could have steered this along better lines - as the writer of the The Beater and the Game he may have aimed to do so - but if an attempt were made it was not successful. It may more simply have been a sign that inspiration was beginning to flag on the show. For all that, this is still an interesting episode which is worth watching, and stands up well compared to most series.

A middle-aged man, Arthur Biddle, calls into the office announcing, "She's left me." He explains to Frank that his wife has left him and is with another man. He is very vague in his description, simply referring to her as a "lovely girl". Frank asks if he wants evidence for a divorce but Arthur says he wants her traced and wants her back. When Frank pins him down on his wife's age he admits that she is fifty-four - hardly the youngster suggested by his description. The man she is apparently with is called Brian Stafford and he works for a local engineering firm.

Frank tracks down Stafford and checks his movements. There is absolutely no sign of a middle-aged woman. Indeed Stafford and has no friends and lives in a boarding house. The only person he is seen with briefly is a young woman but he hardly even speaks to her. Stafford soon starts to realise that he is being watched and even sits opposite Frank in a cafe, hoping for a reaction but he gets none. 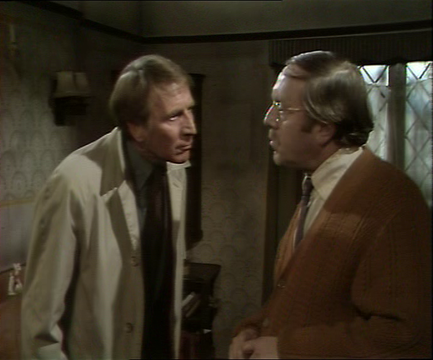 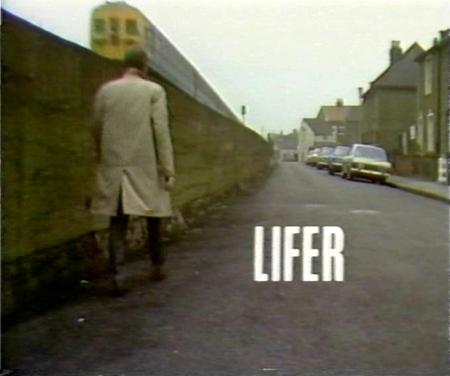 realises he is being tailed