Pearson) is hiding something

A young woman, Rosemary Jenks, comes to see Frank because she is very worried about her father. She is certain there is something wrong but he won't tell her. He works as a chief clerk in an engineering firm and she feels that somehow he might have got into trouble. She brings a piece of paper showing that he has been practising his boss's signature - which Frank points out is fraud - but knows no more. She wants to find out exactly what he has been doing.

Frank goes for an interview as a cleaner at the firm, allowing himself to be interviewed by Mr. Jenks. Jenks dispatches Frank very quickly after he fails to meet the job criteria and nothing is revealed through the charade. Frank then follows him home. Jenks takes a detour and drops something off in a shed on his allotment. Frank gets the keys and goes with Rosemary to investigate. They discover many boxes of carbon paper. It transpires that Mr. Jenks is being blackmailed into paying for these supplies by a corrupt saleman called Ralph Carter. He forges his boss's signature and the firm pays for the paper. The problem is now to stop the supplies before the offence is discovered by others - without Jenks getting into serious trouble.

Another welcome aspect is a brief return for Peter Childs as Ron Gash, with whom Frank had briefly worked in Walton-on-Thames. Ron comes back to give Frank some timely information while also offering him some extra work. Ron is very complimentary about the new office and both talk brightly of their work prospects although with Frank there may be an element of the brave face. Indeed he has been cut off by the electricity Board following a "misunderstanding" and his efforts to get reconnected provide some neat humour. One of the appealing characteristics of the show was the return of familiar characters like Ron, Helen Mortimer and Nell Holdsworth and if the show had continued maybe he would have been seen occasionally again.

Sara Aimson gives a creditable account as the concerned Rosemary who unusually turns up at the office on her bike. Richard Pearson handles the central role effectively. It's interesting to see how his anxious personality changes to a far more decisive one when Frank attends for his spurious interview. He is much more authoritative - to the point of rudeness it has to be said - and Frank is not able to make any headway. If he had behaved like this with Carter he would have saved himself a lot of trouble.

Marjie Lawrence returned for the last of her four guest appearances (a joint record with Barbara Keogh) as Jenks's secretary, Barbara. There is quite a touching scene where she and her colleagues bring him a present which clearly makes an impact on this normally austere man. They watch him through his office window as he appreciates the gesture.

The only real weak spot on show is Michael Turner's rather underwhelming Mr. Graham. The conclusion gives plenty of food for thought. There is a fair amount of quality overall but not enough to make a big impression. All the same a solid effort.

tries to work his charm on

Paula (Delena Kidd) but she is

Roger Marshall returned for a final script - his only one in the last series - and was joined by Kim Mills, the show's principle director in the first few years when they were its dominant creative partnership. Indeed this was the first collaboration since A Fixed Address six years earlier. The result is a decent enough episode, definitely better than the preceding Lifer or the following Fit of Conscience but still a little lacklustre compared to the show's exceptional standards. Somehow it never really grips the viewer although there are certainly intriguing elements on show.

Jenks's predicament is a familiar one. How does one get someone to admit they have a problem? Do they have a problem at all? Many people have made the same mistake as Jenks. They then compound the damage by trying to cover it up. Their guilt becomes more profound but their only answer is to maintain the subterfuge and dig themselves even deeper into the hole. What is the best response? Should they just hope they'll get away with it? Should they come clean and hope for mercy? Is honesty the best policy? These are fascinating dilemmas and quite well covered.Another angle explored is how wrongdoing often goes so far because of lack of oversight and proper management. Jenks's boss Mr. Graham has overlooked the continual overspends and seems more interested in golf than business. Indeed he even charges a subscription to a golf club to the firm on the grounds of using it to entertain clients. We thus see how those in senior positions can often get away with or justify their indulgences, unlike those underneath them.

The highlight of the episode has to be a marvellous performance by Stephen Yardley as salesman Ralph Carter. Stephen seems to have spent much of his career playing shady characters and he does a great job here. Carter certainly has the gift of the gab, and is more than a match for the weak-minded Jenks. He is a con-man but he relies on the weakness and greed of others to make his mark. By contrast there is a great scene where he tries his tricks on Paula at another firm. His smooth style is definitely designed to win over the ladies but she is having none of it, nor does she fall for his pleas for sympathy. However resilience is his hallmark and he doesn't seem fazed by this rejection. As he later tells Frank, "There's no room for pride in selling." Frank has his number without question and the two spar splendidly. The scene though with the excellent Delena Kidd (who bears a remarkable resemblance to Jennifer Daniel who appeared in the concluding Unlucky For Some as well as A Mug Named Frank) as Paula is the highlight. 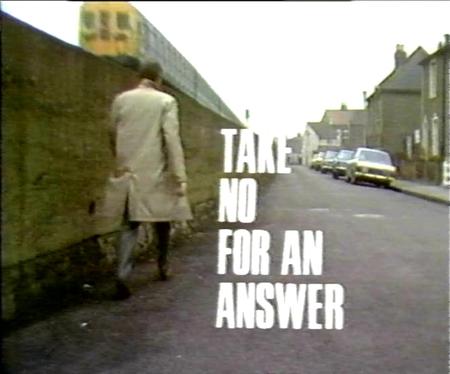 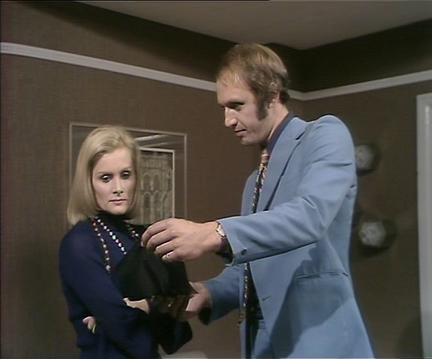 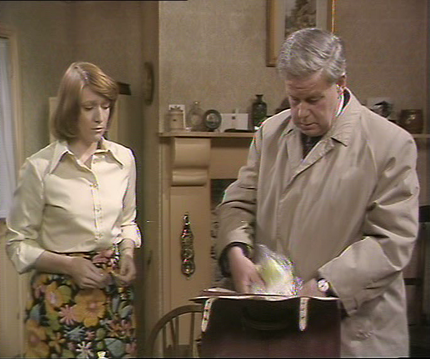